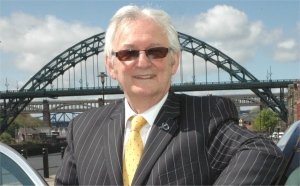 In London, big chauffeur fleets are a major part of the business travel mix. But in many other big UK cities, the executive chauffeur concept is still largely unexplored. And that means bright entrepreneurs can carve out a niche for themselves and build a solid business foundation.

It’s a concept Brian Rudd understands very well. As a London-based senior executive in the electronics industry, he regularly used London chauffeur companies in the 1990s to transport his clients. And when he started hankering for a return to his home town of Newcastle-upon-Tyne around the time of the Millennium, he had an idea. 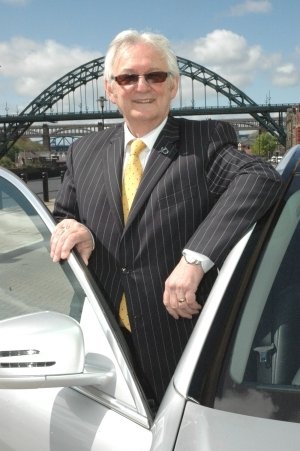 “I decided I wanted to start my on business and I wanted to return home to the north-east. I wasn’t sure what sort of business I wanted to be in, but I had used chauffeur cars in London. And I’ve always had an interest in vehicles – I suppose it’s safe to say I’m a petrolhead!” he says.

First of all, Brian employed a market research company to find out if there was a need for a Tyneside-based chauffeur company.

“This was 2001. The research that came back showed there was a need for a higher end service than a general taxi. We established there was a gap in the market that we thought we could fill.”

Newcastle has no shortage of taxi and private hire operators, including some big and professional fleets such as Blueline, with well over 100 cars. “We wanted to set ourselves apart and find our own niche,” says Brian. “You could say we’re doing a similar job to a taxi – we’re conveying people from A to B. But it’s that crucial bit in the middle – the experience of being conveyed – that we’re providing. And that’s vastly different.”

His first move was to set up a new company, called Execulink Travel. But shortly after he’d started, the opportunity to buy another, bigger business came along, as the owner wanted to take a step back. The company was called Parker Executive Services, and yes, the name was inspired by Lady Penelope’s chauffeur in the 1960s puppet sci-fi show Thunderbirds: the company was started in the mid-’90s, at a time when there was renewed interest in the show.

“It’s almost subliminal – it conjures up the right sort of image,” says Brian. “If you go out on to the streets of Newcastle and ask people if they know any chauffeur services, the chances are they’ll say ‘Parkers’. Not just because of the TV series, but also because Parkers has been around the longest as a brand in the north-east.”

So Brian merged his own company into his acquisition and the company became Parkers Execulink. More recently, he’s rebranded as Parkers Executive Chauffeurs, with new, stylised branding with a unique font featuring a distinctive letter ‘P’. This is also worn as a lapel badge by all the drivers. “It’s about recognition as far as the clients are concerned. I think less is more – we could have ‘Parkers’ emblazoned across the driver’s tie, but if you look at the top brands, like Mercedes and BMW, it’s all about image – they don’t have to say anything. That’s what we’re trying to achieve.

The new look extends right across the business – including the website, which now includes an online booking tool – essential when most of the customers are business users. “It’s all about efficiency and time-saving,” says Brian. An app is in the plans too.

The rebranding also extended to a change of car policy. “We’re entirely Mercedes-Benz now. We used to have various vehicles including Jaguars, Audis and Range-Rovers, but gradually we’ve honed it down to what we think is most appropriate for our clientele. It’s the branding – it just has that cachet. Our customers don’t want to risk having a 10-year-old Mondeo taxi coming to pick them up. They want to know exactly what’s coming.” 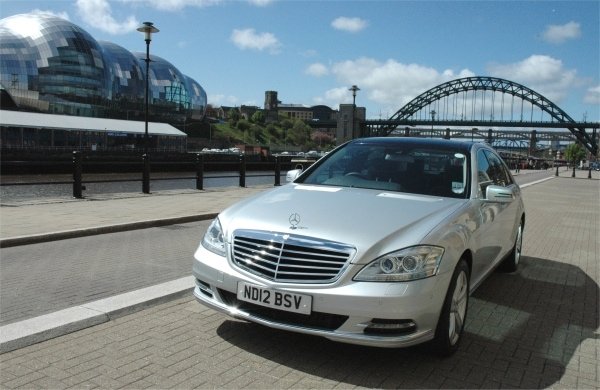 Another advantage of Mercedes is the availability of larger vehicles in addition to the regular E-Class and S-Class cars – including the Viano MPV and even a 16-seater Sprinter minibus, both of which feature on the Parkers fleet. Brian is a big fan of the Viano: “We started with the V-Class, which was basically a van with windows. But it’s just got better and better and better.”

The Sprinter comes into its own when Parkers organises corporate events – it’s been a successful addition to the fleet – “a lovely vehicle” he says – and could in future be joined by a larger vehicle, which would make Parkers a fully-fledged coach operator as well as a chauffeur firm.

Currently Parkers has eight vehicles – all company-owned. “We’re set up as a traditional company with employees and our own resources,” he says. “We did that because we found there were a lot of owner-drivers in the market, but if you want to offer a regular service to bigger companies and guarantee a level of service, we had to have our own drivers who we could train, and our own operating procedures, backed up with outside NVQ training.”

With plenty of large businesses in the Tyne and Wear area – not just in Newcastle, but in the swathes of industrial estates around Sunderland and Washington, Parkers has become well established. And now Brian has decided to expand the company’s operating area.

“We’re just about to open in Middlesbrough. Again, there’s a niche in the market that we can fill. There’s huge petrochemical and pharmaceutical industries around Teesside – what used to be ICI that has now been split up.”

Initially Parkers will be running an additional three cars from Teesside, plus a small office – it’ll be a stand-alone business with the Parkers brand. It also gives flexibility that will help both the Newcastle and Teesside businesses – it’s not too far to Middlesbrough, so it’s easy enough to get an extra car down there if needed. Operations have already started but the office not yet open – for now the business is controlled from Parker’s office overlooking the River Tyne in central Newcastle.

Clients include big global operators such as International Paints, and there are airline accounts with BA and KLM. Brian believes businesses don’t want to take risks – they want to be assured they’re getting the right level of service. “They want to create the right impression with their clients, so we believe we are an extension of their business not just an outside operator providing the odd car here and there. We try to get close to the key clients so we can mould what we offer to their requirements.”

Fleet management is vital, he says. “We have a tracking system on all the vehicles so we know where they are every minute of every day. It helps us to juggle resources, which is sometimes necessary because of flight or train delays.”

Because of this level of control, Brian reckons the Parkers could cover demand from the whole Tyne/Wear/Tees area with a fleet that’s not significantly bigger than the current level. “Maybe 50% more cars than at present, and no more than 20 in total. Clever use of scheduling means the assets can be sweated. The more cars you have the easier it becomes to manage the business. Some of the extra jobs fit into the gaps when the fleet is not being used,” he says.

Brian says his biggest challenge is finding the right drivers. “You don’t just need a friendly, happy chappy. There’s a sort of authority that you need for a chauffeuring job. The driver needs to know when not to talk, and how to respond and be discreet – no Tweeting about the client he’s just carried! We do set the bar quite high. The client knows they’re going to get an intelligent, discreet driver who’s going to turn up on time.”

He continues: “The sort of individual who suits our business best are ex-professional people or ex-Police – we have four ex-police drivers. One of our drivers is an ex-pilot. One of the Teesside recruits is another policeman who has handled VIP visits – including Royals.” 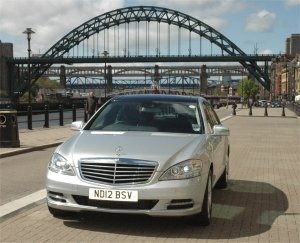 There are a few “reserve” local owner-drivers – but again, it’s extremely hard to find ones that meet Parkers’ standards. “We expect anybody who does any work for us to match our standards. And there are occasions where we need that ninth car.”

Sometimes, the extra driver is Brian himself – he carried out two round-trips from Newcastle to Manchester over a recent weekend. He’s a very hands-on MD, and his primary role includes handling a lot of the major client discussions, in addition to Parker’s two sales executives. “The ethos is whatever it takes! You’ve got to be prepared to do that in our industry. I wouldn’t ask our guys to do anything I wouldn’t do. And I’m happy to jump in a car and take a client to Manchester,” he says.

“I actually still really enjoy that part of the job – I really enjoy the feedback you get, so you can tweak and change things. And the client doesn’t necessarily know the driver is the boss, so is more likely to be open and honest about the service.”

Long-haul jobs are increasingly important – “Cheaper than train, a lot more comfortable, and truly door-to-door,” he says. “It’s more time-efficient too. If the client is going to meetings at several sites, we stay with them for the day.” For these jobs, Parkers offers “in-flight refreshments” – continental breakfasts served in the car for executives picked up early in the morning, plus wifi in the cars so they can work en route.

Bedding in the Teesside operation will take “a couple of years”, but Brian has greater ambitions for Parkers. “Ultimately, we could take it national – probably the rest of the country outside London. I believe you’ve got to aim high to have a chance of succeeding. There isn’t a national operator or a strong national brand – so that’s why we’ve set the building blocks and firm foundations with the brand and the look.”

It would cost money, and Brian would probably seek private investment. The Teesside expansion has been internally funded, but a bigger move would be more difficult to fund. The next logical step could be into Yorkshire or even Scotland. “We’re only 50 miles from the border. There are similar sort of operators – some do a great job. But there are also a lot of owner-drivers, and the limitations this entails. There are benefits from our kind of business model.”

He’s hoping that the Law Commission introduces some specific rules for chauffeurs. “I don’t think the regulations here in the north-east are specific enough for our type of operation. We have to have a license as a private hire operator. But we’re a chauffeur company, not a taxi company. I find it frustrating that the rules are different in different areas – there’s no reason why they should be. There should be national standards. And there should be specific rules for chauffeurs – we shouldn’t be treated the same as a private hire taxi.”