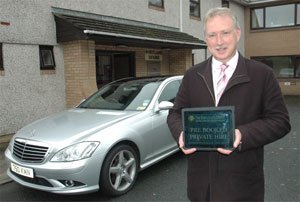 To make a successful business, you need the right idea, at the right time, in the right place. Richard Clay saw a lot of businesses when he worked for a bank on the Isle of Man. Many of his clients from the British mainland would fly in for meetings, and Richard kept hearing a common complaint: the dismal state of the local taxis that used to pick them up from the airport and bring them to the office.

“The cars were often appalling – I don’t know how they got through the test,” he says.And the drivers were no better: unshaven, with shellsuits on, and the cars smelled of smoke. “And by the time they got to the office, they knew the driver’s life history. They knew his mum had warts!” Richard jokes.

“I often thought to myself that there must be a niche for someone to set up a nice clean good quality service, with a nice car and a polite driver with shirt and tie, pressed trousers and polished shoes. I just didn’t imagine it would be me that would do it!”

But when the financial crisis hit, life at the bank became uncertain. Richard feared he was going to be made redundant. “Eric Frost, a car dealer I used to deal with, had approached me about working together. He’d been offered a chauffeur business – the driver wanted to retire, but he had a good client base – not big, but good quality people, as well as an old S-class that was in mint condition,” says Richard.

At that time Eric had sold his dealership, so the two men decided to take on the business, called simply The Executive’s Choice. Richard used a small financial investment that had matured as his share of the capital, and found himself at the wheel of the ageing but immaculate S-class.

That was two years ago. Initially he ran the old S-class for six months, but soon upgraded to a smart, new silver current-shape model. Business partner Eric got a good deal on a 2010 old-shape Audi A8, one of the last of the line, giving the two-man band the best chauffeur car fleet on the Island.

It didn’t take long for word to spread – the Isle of Man is not a big place – mainly through word of mouth, but also via a company website. And now the business is hitting its targets ahead of schedule. “We set a goal of three years to make it a paying business, but we’ve done it in two,” he says. “We’re definitely making it pay – without the fuel bill it might be a bit better, but everyone has the same problem!”

The Executive’s Choice targets business customers, CEOs and VIPs, including arrivals at the IoM’s Ronaldsway airport via private jet. “We also do some island tours for visitors who’ve come over for meetings, which works very well,” he says

It’s a premium service, but not over-priced. “For what we offer, it’s not expensive,” Richard says. The emphasis is on customer service – opening the car door for the customer, loading and unloading their luggage and taking it to the front door rather than just dumping it on the pavement. Simple stuff, but something that ‘shellsuit man’ just wasn’t doing.

Results are satisfying “We’re constantly getting companies ringing up telling us that their visitors are made up with the service you gave,” he says. Now the company is planning to grow. TEC needs a fair bit more work to get a full-time third car, though an extra set of wheels is still available – Richard sold his old S-class to a local licensed driver called Rob Cowley, and the car is still in immaculate condition. “Rob’s a really nice guy, though he’s semi-retired, so we put extra jobs his way – which happens a fair bit. In return, we handle jobs for him when he’s double-booked.”

One of the problems is managing peaks of demand from the airport. Flights from London, Manchester and Liverpool all arrive at the busy airport within an hour of each other – which does cause a few problems as a round trip to the capital, Douglas, takes about an hour. June and July are the busiest months, though the famous TT motorcycle races, which take place in May and June, do cause problems, as many island roads are closed.

In a typical day, Richard usually has an early morning airport start, at around 5.30am, and sometimes he’ll do a second trip at around 8am. Most runs are from Douglas, though TEC does have a large client in Ramsey. Then there are morning pick-ups from the arriving UK flights, followed by a lull until the 2pm Gatwick fight arrives. Afternoon is quieter – though there are “lunch runs” for local directors. Then the late afternoon is taken up with trips to the airport for departing visitors.

Evening work tends to be dinners, where several cars are required to pick up corporate guests. These events require careful managing – ensuring that the most important guests get the S-class or A8, while other guests have to make do with regular private hire vehicles. “We sub-contract some of the independent taxi guys we know from the airport, with cars like Passats – nice clean cars. They brush themselves up too, putting on a shirt and tie, and they take the roof signs off for us, as we don’t like any signs on the cars.”

Richard believes attention to detail is important, and one nice touch is his use of an iPad as a customer name board while he’s waiting at the airport. Instead of a scruffy bit of hand-written paper, Richard displays the customer’s name in large type on the iPad, along with TEC’s logo. It looks professional and makes an excellent first impression, he says. “It’s brilliant advertising – it really stands out, especially at night when it shines in the dark. Sometimes we pick someone up from a corporate event, and we just put the iPad in the car window, so they know which car is theirs.”

The iPad is also used to take payments for card payments. He uses the virtual terminal system from payment technology specialists CabCard, which is also based on the Isle of Man. The system works well, allowing the client to input his card details using a 3D secure function. The card payment is sent to the bank for authorisation and payment confirmed before Richard leaves to pick up his next customer.

Initially Richard was sceptical about the need for card payments. “But I had to turn down a booking from a major bank, which wanted to use cards, as all the company’s managers had been issued with corporate credit cards to handle their expenses, instead of cash and handfuls of receipts.” Richard is also looking to add a pre-payment function to the TEC website, as increasingly corporate clients want to pay this way, rather than with cash.

Looking ahead, Richard is hoping to grow his business on the back of the new corporate jet centre that has just opened at the airport, complete with meet and greet terminal. “We do quite a bit with private jets already, and we’re in with the operator of the terminal as preferred supplier for people flying in by private jet. Hopefully that will be the catalyst for us to add a third car.”

Right place, right time, right idea – but more importantly, the right attitude is paying off for this small start-up company, bringing much-needed quality to a small but significant market.