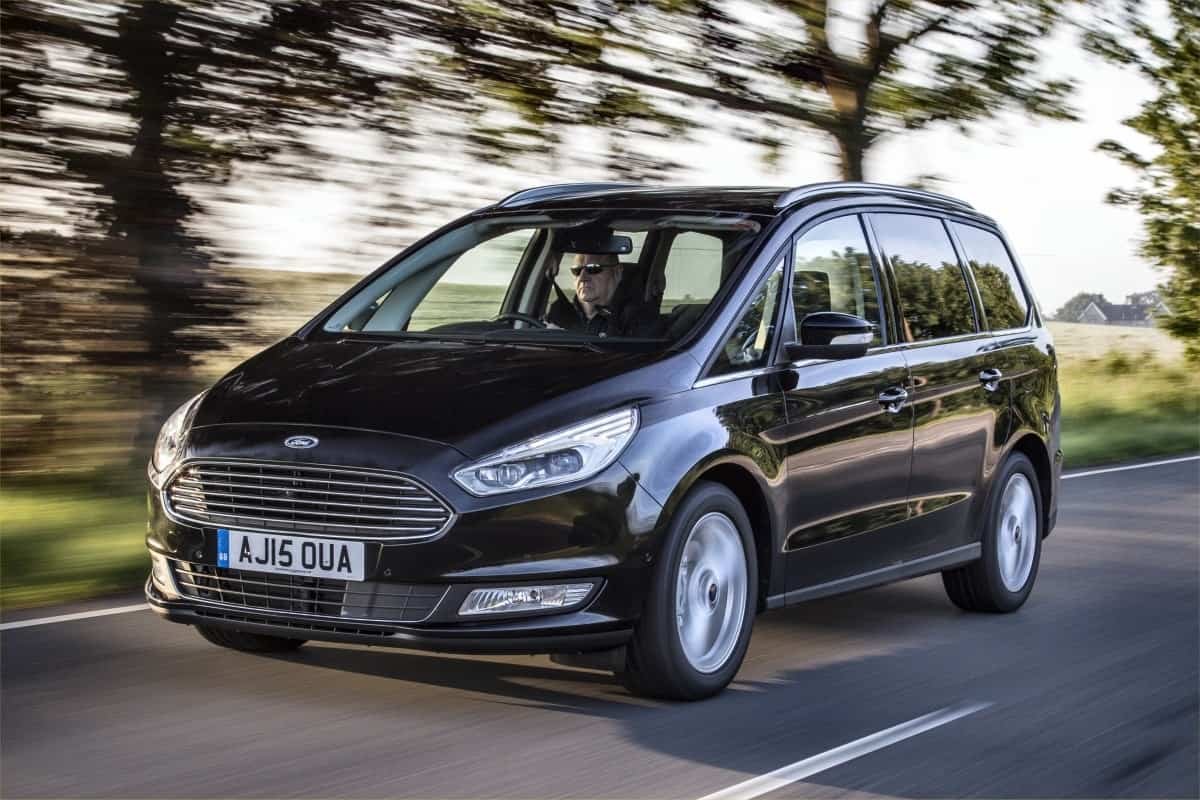 Hard to believe that the Ford Galaxy has been around for almost 20 years. And in that time, over two distinctive generations, the big Ford seven-seater has established itself as one of the most significant private hire cars on the market.

The little matter of 3,000 Galaxys serving as the backbone of the Addison Lee fleet has helped, of course. And many operators have bought secondhand cars from London’s biggest private hire operator, ensuring many of its fleet have a second life, still within the taxi sector. And other big fleets, such as Keen Group and Brunel, have substantial numbers of Galaxys on strength.

It’s not difficult to see why the car is so popular. It’s roomy, with seven seats. It also has good reliability, low running costs and substantial dealer backing. As a versatile vehicle, capable of everything from executive chauffeuring to airport runs and local taxi work, the Galaxy takes some beating.

Now there’s an all-new third-generation Galaxy, and it’s clear from first glance that Ford isn’t planning to mess with the basic formula. The new Galaxy is all-new – but it’s very recognisably a Galaxy.

The biggest change is at the front, where the latest Ford “Aston Martin” grille is to the fore, complete with chrome crossbars – the Ford logo now sits above the grille on the bonnet. It’s tidy, distinctive and on-message when seen alongside other latest-generation Fords.

Side profile is similar – the sharp creases are retained, but there’s less fuss around the front wheel arch. The distinctive Galaxy “kick-up” at the rear side window is retained, though it’s a little smoother.

At the rear, the flush glass of the rear window extends right down to the number plate – giving operators a nice big canvas on to which they can add their logo, Addy Lee style. 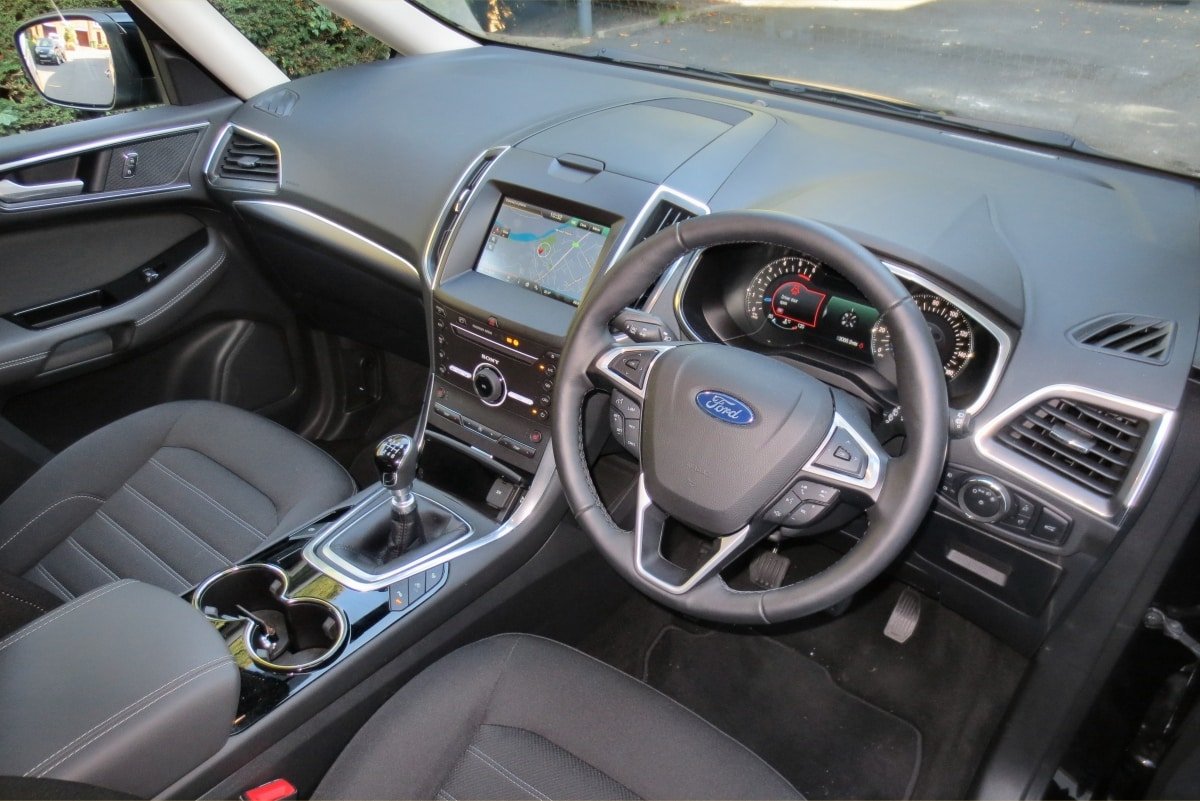 Climb behind the wheel and it’s very different, however. Galaxy shares a platform with the Mondeo, and clearly a lot of other parts are common to both models too. Both the instrument cluster and the very capable new infotainment system are copied straight cross from the latest Mondeo.

The dashboard neatly incorporates digital information with analogue speedometer and rev counter gauges. A well-concealed colour screen links the two primary dials. In fact, only the graduated bezels are analogue – everything else, including the speedometer and rev counter needles, are part of the digital display. This integrates satnav instructions and radio information with the central satnav.

The dashboard layout is very much cleaner than before, Gone is the switchgear flanking the satnav screen. Now, apart from a large volume knob, only the air conditioning is controlled by separate switches and buttons A centrally mounted 8in touch screen controls satnav, infotainment, phone and climate control functions, and switches between the four just by taping a finger in one of the corners of the screen. 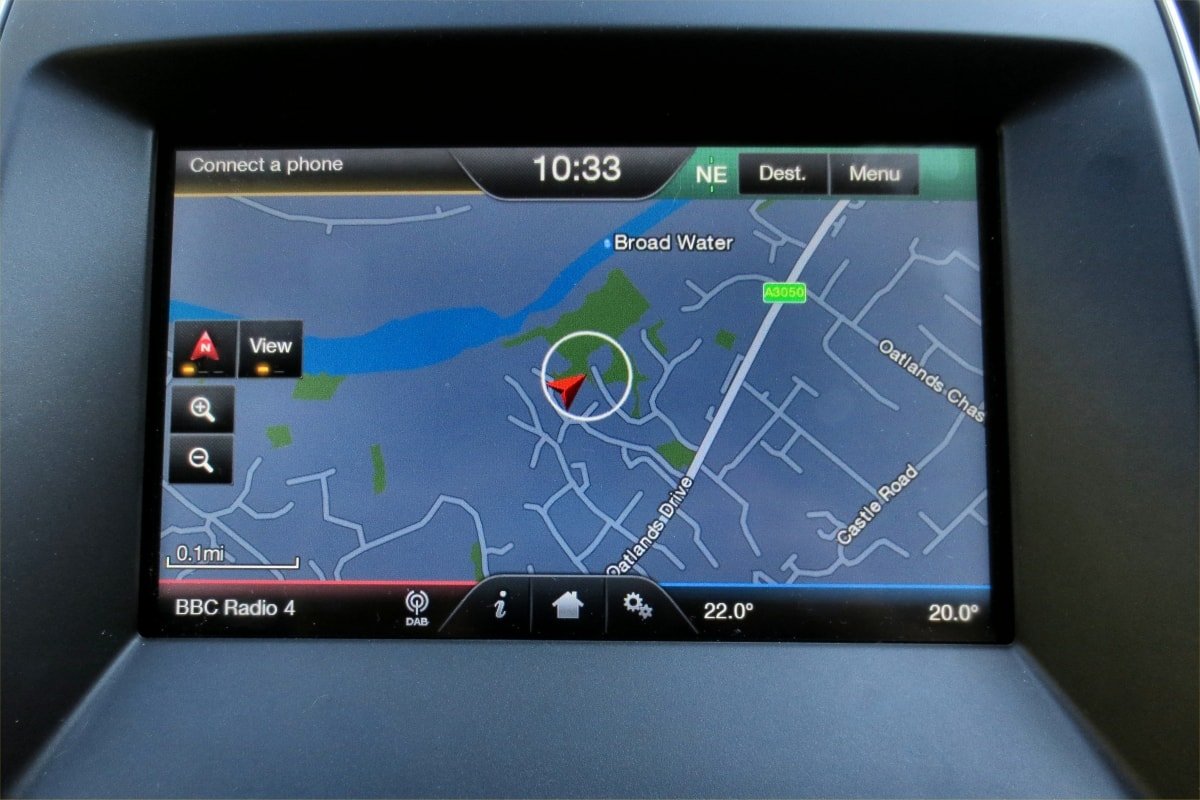 Maps are clear, with crisp typography, and navigation directions appear on the screen as well as on the dashboard display.

Our test car is a higher-powered 180PS model. All Galaxys are now Euro 6 compliant, and all, apart from the lowest-spec petrol model, are 2.0-litre engined. The 1.6 diesel has gone from the range, and now all TDCi engines are 2-litre units, in four power options. Only one 120PS model is available, with Zetec trim, and just one range-topping bi-turbo 210PS model in Titanium X spec.

The majority of sales will be the 150PS model, though there’s not a great deal of difference in performance terms between this and the 180PS model – fuel economy and CO2 numbers are the same – a claimed 56.5mpg combined and 129g/km for manual; 52.3mpg and 139g/km for automatic.

In real-world conditions, that translated to 43.5mpg on our test. The previous generation Galaxy in 163PS automatic guise yielded a figure of 39.6mpg on test back in 2011, while we achieved 43.0mpg on a new Mondeo estate with the exact same powertrain as on our Galaxy. Opting for manual should give a few more miles per gallon too.

Galaxy retains the solid feel of the old model while adding refinement – cabin noise is extremely low, and the engine note is barely noticeable, even under acceleration. Ford has added sound-deadening materials under the body, and acoustic glass is now fitted.

The dual-clutch auto box is as smooth as ever, and up-shifts are made quickly in order to optimise fuel economy – revs rarely reach 3,000 under acceleration – at 50mph, the Galaxy cruises at less than 1,500rpm.

Cornering is very precise for a big car, and there is very little body roll. It’s helped by adaptive steering technology, which adjusts steering the ratio according to speed to optimise manoeuvrability and precision – so it’s tighter at speed, requiring less input – great for hustling down country roads.

Adaptive cruise control is fitted as an option, and a new addition to this system can recognise road signs and automatically adjust the vehicle’s speed to meet the limit – which could easily save you getting any more points on your licence!

Safety is enhanced by fitment of pre-collision assist with pedestrian detection, which will reduce the severity of some frontal collisions involving vehicles and pedestrians. Adaptive LED headlamps are fitted – these can detect vehicles ahead and fade out light that could dazzle oncoming drivers, while retaining maximum illumination for other areas.

One particularly neat addition is a new Front Split View Camera. Available as an option, it displays a 180-degree view from the front of the car, using a video camera in the grille. At a blind junction or exiting a driveway, the camera enables drivers to easily spot approaching vehicles, pedestrians or cyclists – literally seeing round corners. 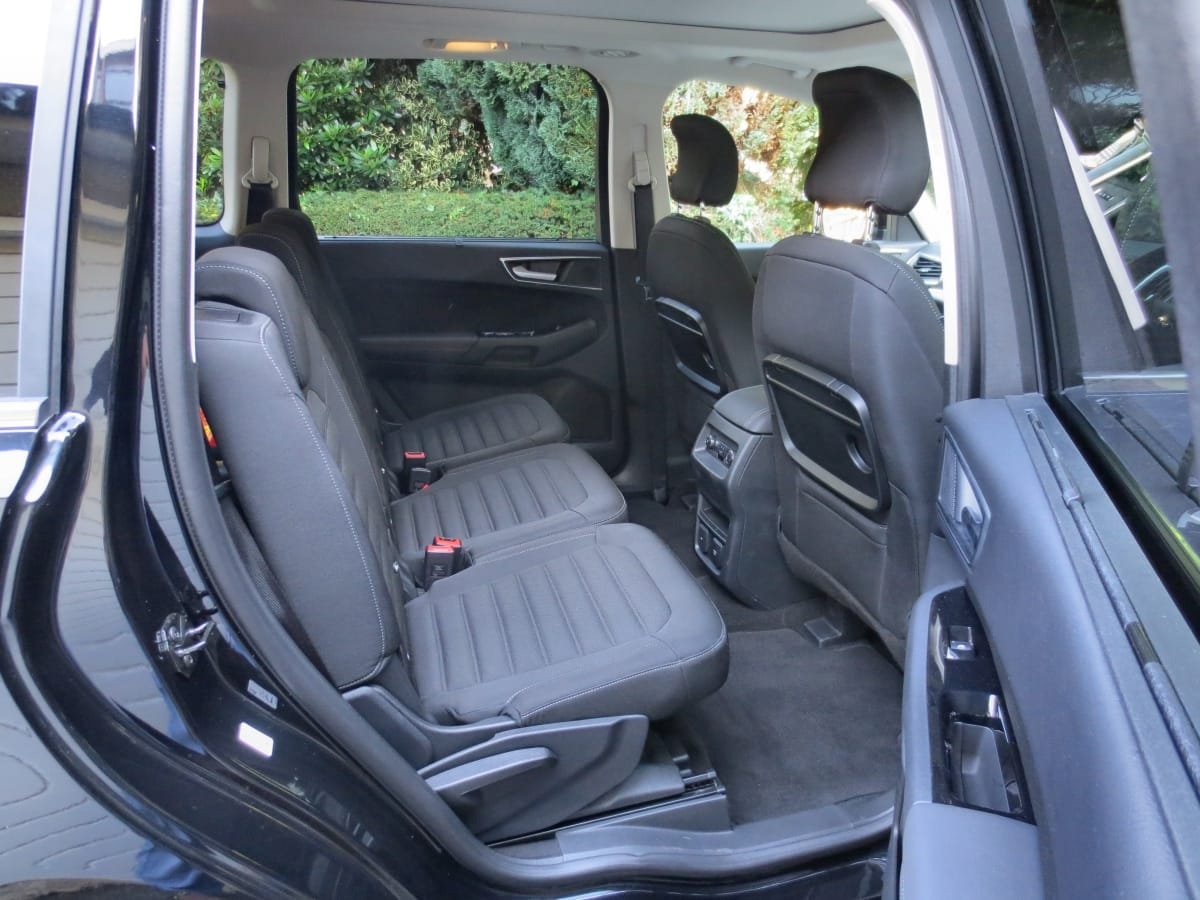 One touch access to the third row is easy. The second-row seats tilt and slide forward in a single action, and a recessed floor design makes getting in and out of the car easier for passengers. A double seal helps the inner panel stay clean and reduces the risk of passengers dirtying their clothes by brushing against the car exterior when getting in or out. 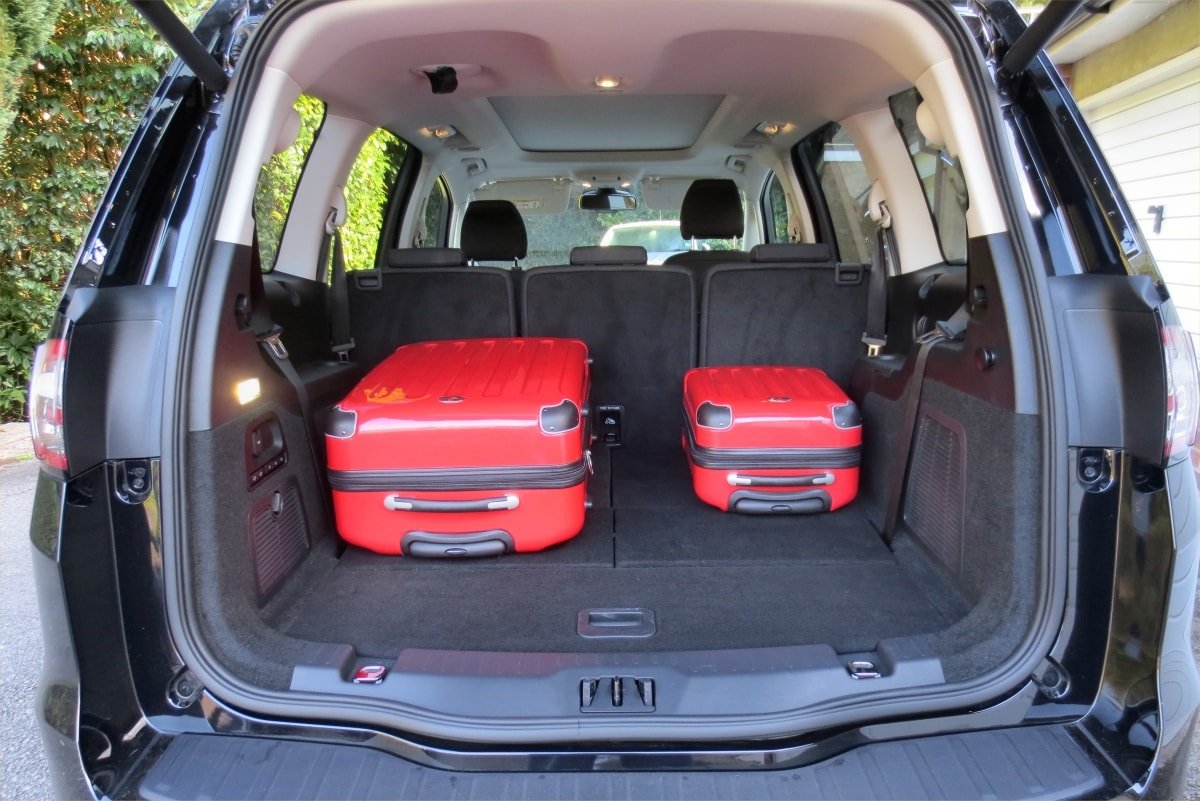 The tailgate is electric on our car, and can be opened from the remote, and closed by pressing a button on the tailgate. Alternatively a button on the dash can open it. In seven-seat mode, we could just accommodate our standard cases – with the third row down, there’s space for several large cases. 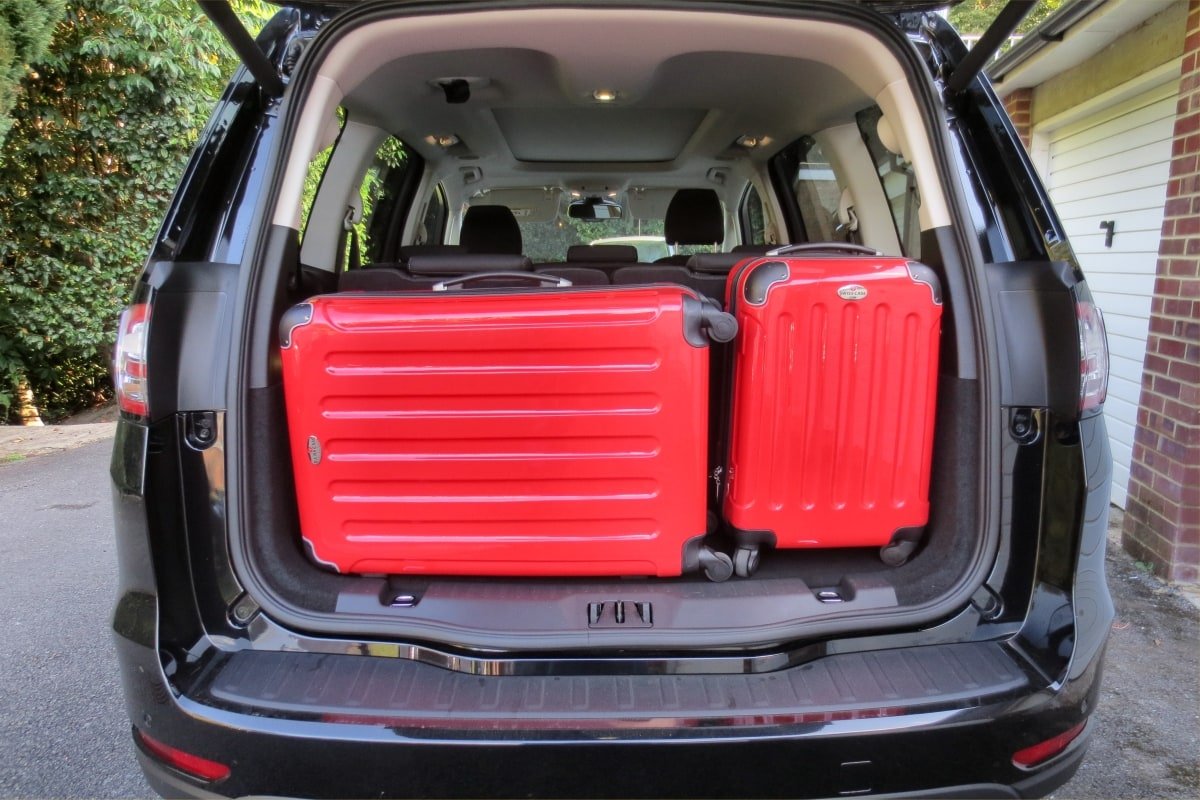 Folding down the third row is a joy – just press buttons on the side wall of the load bay and each of the two seats immediately drops. Press again and they slowly rise again, one at a time. You can also drop the second row seats from boot-mounted buttons. Very neat and quick to operate.

Ford has changed everything on the new Galaxy –and has delivered a car that is 100% Galaxy. The look is evolutionary, and the basic concept is unaltered. But the interior is much-improved, especially the dash, which actually hangs together on Galaxy better than it does on Mondeo.

Accessibility was always good, but is now improved with electric rear seats. The Galaxy still struggles to take six passengers with luggage – but carrying four leave a capacious boot.

Powertrains are familiar, but feel more refined, and handling has been improved through improvements to rear suspension and steering. Prices have gone up – though the changes to engines mean it’s hard to compare like-for-like. But our test car, at £32,345 on the road, is £1,720 more expensive than the outgoing 163PS Titanium auto. Expect prices to match the new VW Sharan pound-for-pound.