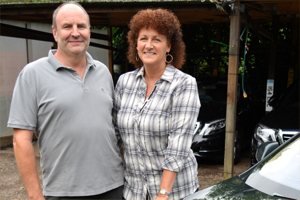 You might recognise Andrew Fowler. In his day job, he’s one of Britain’s best chauffeurs – a silver medallist in the driver of the year category in Professional Driver’s 2013 QSi Awards.

The business grew out of necessity, says Andrew. “I remember when we wanted to get other vehicles, how difficult it was. You had to borrow cars from friends, or rent from Hertz – but it was so expensive that you ended up doing the job for nothing.”

This is in the days before PCO licensing, of course, and the advent of proper regulation in 1998 was the trigger for Jane and Andrew to set up a formal business to provide licensed and insured cars on short-term rental. “You couldn’t just go and borrow a friend’s car any more.”

At first it wasn’t heavily marketed. “We didn’t broadcast it – just kept it for our friends and our ‘subbies’,” says Jane. But demand has steadily grown, and currently Chauffeur Rentals has 20 cars on strength. These are also used by Location Chauffeurs – really, the two businesses are intertwined. “We specify all the cars for our own operation, which is why they have such a high spec,” says Jane.

They try to keep the two operations in balance, but there are times, says Andrew, when all the cars are out on rental, and Location has had to farm out work to regular sub-contractors as it didn’t have enough cars available! “You get peaks and troughs in both businesses,” he adds.

And the rental business is growing, especially since Chauffeur Rental started promoting itself more actively through advertising in Professional Driver, and from this year, sponsorship of the Professional Driver Car of the Year awards. 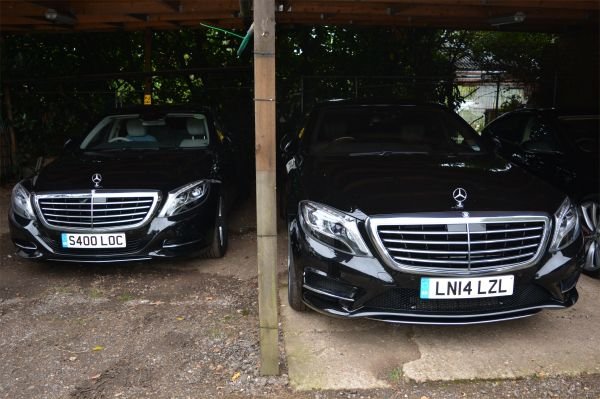 Chauffeur Rentals concentrates on the top end of the market. Most of its cars are heavily loaded in terms of specification, and are kept on the fleet for a maximum of three years. The fleet is split roughly three ways into Mercedes-Benz S-Class, E-Class and Viano, but with the occasional interloper from outside Mercedes, if that’s what the clients want.

This includes a Range Rover Autobiography, with just about every option fitted – even the retractable side step and the dog guard. It’s something of a dream car for avowed Land-Rover fan Andrew. The back garden of the Fowlers’ home in South Mimms, close to where the M25 meets the A1, is littered with Land-Rovers and Range Rovers, including an original 1971 Range Rover that Andrew plans to restore to pristine condition, and a couple of rather more battered Discoveries that are scheduled to be used in a charity drive to Africa next year.

And the latest addition to the Chauffeur Rental fleet is a Tesla S electric car, which has just arrived, and which represents the future, the Fowlers believe. “The Tesla’s our most interesting acquisition,” says Andrew. The only drawback is that Tesla is new – and is on a steep learning curve, especially when it comes to licensing and using the cars for chauffeuring. And charging the car presents a challenge – it’s got to be done in a certain way! 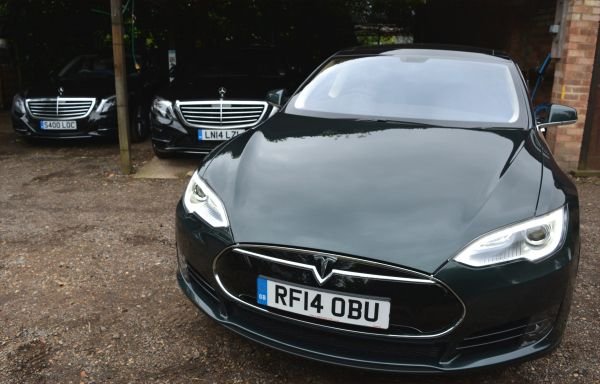 But Andrew can see a time when all chauffeur cars are electric, and all Chauffeur Rental will be loaning out are electric, or possibly hybrid cars. “Will the country be able to provide enough electric energy to power all these electric vehicles? I’m not sure it can. Tesla wanted to put in a fast-charger at South Mimms services, but the power supply isn’t strong enough.” He also finds the different systems for charging frustrating – the Tesla can use some of the charge points, but not all.

Also on order are seven new Mercedes-Benz V-Class MPVs, which will gradually replace the Vianos when they start arriving in the UK early next year. Andrew’s not sure when deliveries will start – the official Mercedes line is still Q1, 2015. Mercedes is still the prime choice. “I love the Audi A8, but the clients want S-Class,” says Andrew. “We’re in the service business,” adds Jane. “We give the clients the cars they ask for.”

Renting out a car form Chauffeur Rental is very simple – so long as the applicant is a PCO-licensed driver. “All we need is your PCO license and your driver’s license,” says Andrew. The CRB checks have been carried out by the PCO, so there’s no need to do these again. And the cars are all insured for private hire and self-drive, so the chauffeur doesn’t need to arrange this separately.

“Insurance is a huge outlay for us,” says Jane. But it’s necessary – as Chauffeur Rental doesn’t know who’s going to be travelling in the car. Recently, one car was used to carry pop brat Justin Bieber – and unfortunately, the driver’s getaway skills weren’t good enough to stop the car getting mobbed by the performer’s pre-pubescent fans. The damaged bodywork needed a full respray.

Largely for insurance reasons, Chauffeur Rental will only rent to licensed drivers – unlicensed operators such as wedding car hire operators won’t be catered for.

The business is working – though Jane is nervous about wanting to grow much bigger. It’s hard to get the balance right. “We invest in Vianos, and then everyone wants S-Classes. So we invest in S-Classes, and they all want Vianos again!” she says.

The Rental business is likely to become the main thrust of the Fowlers’ business. Andrew admits he’s doing less driving this year, and focusing on the bigger jobs for regular clients. “The presidents and CEOs of clients insist on Andrew!” says Jane. But the two businesses remain so intertwined it’s hard to imagine Location being completely abandoned.

The focus will remain on top-line chauffeuring, rather than general private hire rentals. “There are companies renting out licensed Toyota Prius for £100 a week, but that’s a lot of hassle,” says Andrew. Jane adds: “We are what it says on the tin – we rent to chauffeurs. We stick to what we know – we know chauffeuring, and we don’t know the minicab business.”

Andrew adds: “It’s nice when the vehicle comes back that we know it’s been appreciated. We always ask about the jobs it’s been used on, and we like it when the client’s happy – as we want them to come back.”

The business is about the right size now, Jane believes. “Any bigger and we’ll lose the personal touch. It’s already harder to keep that – and I’m too much of a control freak to delegate that part of the job!”

So Chauffeur Rental is likely to remain based where it is – in a summer house in the Fowlers’ back garden. “We can’t really run in a traditional office, as we don’t run office hours. We’re busiest at weekends, and people want to pick up cars on Sunday night for a Monday job.” She concludes: “I want us to be big enough to cope, but small enough to care.”