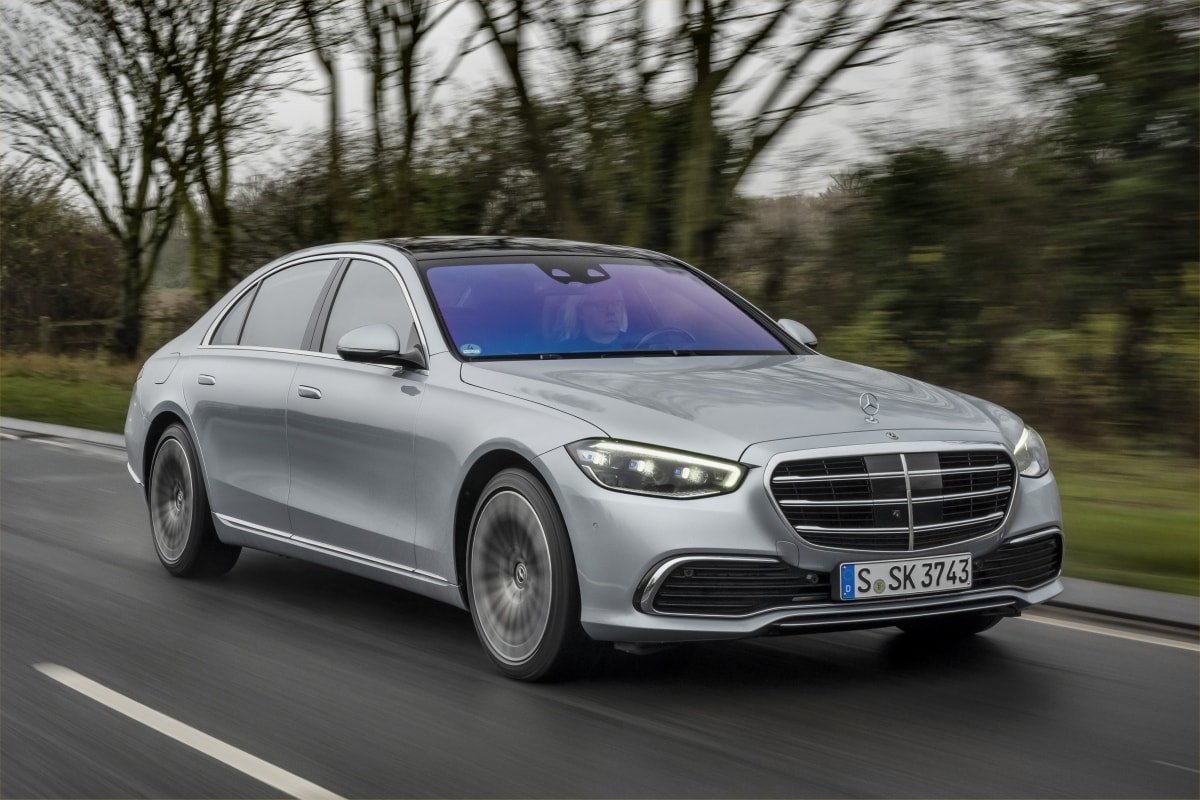 At last, it’s here. And it doesn’t disappoint. Covid-19 has played havoc with manufacturers’ launch schedules, and a second lockdown meant the scheduled October launch of the new Mercedes-Benz S-Class in Stuttgart was cancelled at the last minute, leaving us tantalisingly so near, yet so far from a first encounter with the last S-Class of the internal combustion age.

Thankfully, Mercedes-Benz UK has managed to spirit a couple of cars over to the UK for the press to drive. So instead of Germany, we’re get to see the car at Mercedes’ UK head office at Milton Keynes, and hit the roads of Bedfordshire rather than Baden-Wurtemburg.

The cars are left-hookers, and high-end S500 spec, with straight-six 3.0-litre petrol engine might not be the automatic choice for chauffeurs – but it gives us a chance to see the full technological capabilities of the new S, the latest attempt to raise the bar in the luxury saloon sector.

No hybrids at launch

First, we need to confront the elephant in the room. The order books are open and the first UK cars will be here early in the new year. But London chauffeur operators can relax for now – because you won’t be able to licence the initial supplies of petrol and diesel-engined models for private hire. Mercedes has a difficult job of satisfying global demand, and that means a decision was taken not to include the plug-in hybrid version of the new S-Class in the launch range. China and America, the biggest markets, are still fossil fuel fixated.

It’s coming, but it won’t be here until the second half of 2021, which means Mercedes will be without a London chauffeur offering for the next six, maybe nine months. Covid-19 may have happened at a good time, as the chauffeur market has been devastated by the pandemic. But there will be some chauffeurs who will really want to get their hands on a new S, but will be frustrated at the delay.

It will also give Mercedes-Benz executives a chance to work out exactly where the S-Class PHEV will be pitched. The previous generation S560e was something of a premium model – a cleaner S500, perhaps – whereas rival BMW has pitched its 745Le PHEV as an alternative to a 740Ld diesel, with just a small price differential. This conversation is ongoing in Mercedes, and executives are clearly aware of the issue.

“Please be patient regarding the pricing of the plug-in,” says Dirk Fetzer, Mercedes-Benz’s director of product management for S-Class. “We have not done the pricing yet, but we need to have an entry-level hybrid.” So it looks like the PHEV version will come in a range of trim options, including one that is close to the top-selling diesel S350d.

It’ll be called S580e, and it looks like it’ll be worth waiting for, as Mercedes is claiming a 100km electric range – or 62 miles – making the PHEV more capable than many small EVs of just a few years ago in zero-emissions range terms. It’ll combine the same 3.0-litre petrol engine that we’re testing in the S500 with a gearbox-mounted electric motor and a 28KWh battery pack – twice the capacity of the S560e – to give combined total output of 510hp – 75hp more than the S500.

It’s to be hoped that the battery pack won’t impinge on boot space the way it does on the current S560e. The S500L’s boot is cavernous, so even imagining a higher floor should allow two large cases to be stowed. What there won’t be is a diesel PHEV, like the E300e. Diesel’s days are clearly numbered, and only a few markets might be interested in such a powertrain.

So what’s it like? Styling has been simplified over the previous S-Class. Gone is the descending panel line from the front wing to the base of the rear wheel arch. Instead, the lines are cleaner and simpler – the same evolution as happened with the E-Class. The grille continues to grow, though, while the headlamps are smaller and neater thanks to advances in LED technology. It’s still recognisably an S-Class, though it’s not trying too hard to show off – perhaps because there will be more ostentatious Maybach versions in due course.

The most noticeable change is found when you climb into the driver’s seat. Gone is the “floating” horizontal dashboard and satnav, where two wide-screen 12.3in displays were combined into one continuous display, including driving data, map, infotainment and camera images. The new s-Class again separates the dashboard from the main screen, and the map display has moved back to the centre of the dashboard, below the new, slimline air vents rather than above them. This is a vast, 12.8in OLED display, positioned in portrait format, Tesla-style. There are no buttons or switches at all on the dash apart from the chunky “engine start” button

On the downside, this move takes the screen out of the driver’s immediate eye line – but that doesn’t account for the dashboard display. This is an extraordinary 3D screen, where a 3D map view appears to float behind the dashboard information such as speed – and this combines with a very detailed and comprehensive head-up display which means you’ll not need to refer too often to the main screen to work out where yo are and where you’re heading.

The big central screen means a farewell to a manual entry “Comand controller”. You’ll have to use another method to change the station or turn up the air conditioning. That can be via touch screen via gesture, via steering wheel buttons or via voice command, using the sophisticated MBUX system. It all works well, though I do think there will be many chauffeurs who will miss the discreet ability to enter data and change settings with the hand control on the centre console. But with a number of alternatives available, you should be able to find a way that suits.

Personally, I would prefer to have a directly controllable heater, rather than having to navigate touch-screen menus just to adjust the temperature. We’ll need to live with the car a little longer than two hours in order to find the best way to operate it – and there’s a lot to operate!

Comfort is as you might expect – the seats appear to have the same functionality, including hot-stone massage – as the previous car. And the rear seats are equally impressive, while legroom has increased a tad thanks to a 51mm stretch in the LWB wheelbase (overall length is increased by 34mm). Our test car had funky tan seats with diamond stitching, charcoal headlining and “piano brown” dashboard detailing with bold pinstripes. The level of customisation available is likely to be considerable.

On the road, the new S-Class is a revelation. Traditionally, the flagship Mercedes has always been a more stately drive than either of its key rivals, the BMW 7-series and the Audi A8. But this time round, the new S-Class has been tuned to handle. Hustling round Bedfordshire B-roads was a real pleasure- the S500L felt agile and stable, without a hint of the “waft” that you might have felt with the previous car. Back-to-back with a 7-series, the S perhaps has the edge in terms of ride and handling.

There are a number of reasons for this. One is 4Matic four-wheel drive, available for the first time on UK cars, as Mercedes has found a way to accommodate the drivetrain within a RHD format. Our car is a German-plated left-hooker and that’s the feel we’ll get on UK models. The other major addition is four-wheel steering, available on S400d and S500, which makes for terrific manoeuvrability in urban areas and tight car parks, with the rear wheels moving in opposition to the front wheels at low speeds.

There are two 4WS packages – one offering 4.5 degrees of movement and the other offering 10. Why two? To cope with different wheel sizes and tyre widths. Also factor in air suspension and active damping and the level of stability and precision in cornering is extremely impressive, with almost no perceptible body roll. It’s extremely quiet too – the bodyshell is packed with sound-deadening foam in the spaces within the metal, bringing noise down to extremely low levels.

The car has high levels of autonomy and will be capable of full hands-off Level 3 autonomous driving, when – and if – regulatory approval is given. And you can see this working via the head-up display, which is by some distance the most sophisticated HUD we’ve experienced. As well as speed and nav information, the HUD broadcasts information about the road and the surrounding traffic gleaned from the car’s camera and Lidar systems.

So if you drift out of lane when using lane-keeping assist, a red line appears, directly where the lane border is. When adaptive cruise is on, a lit bar tracks the vehicle in front, while other graphics indicate if a vehicle is about to pull out into your lane. In semi-autonomous mode, the car deals with this information and keeps its distance. For now, you still have to touch the steering wheel every few seconds. But the capability is clearly there. Mercedes says it’s designed for highway use rather than urban conditions.

The automatic park assist systems are Level 4 compliant and can be done without driver intervention. So you can park the car remotely into parallel or perpendicular bays. We haven’t tried it yet – but it’s a handy capability when parking a big car in a car park designed in an age when cars were generally smaller and narrower.

Prices start from £78,705 on-the-road for the entry model, the standard wheelbase S350d AMG Line. In the UK, the best-selling engine has been the S350d and around 80% of S-Classes sold in the UK are long-wheelbase models. A 9G-Tronic nine-speed automatic transmission comes as standard across the range. The powertrain mix will change when the PHEV arrives.

The petrol-engined S 500 4Matic, tested here, has prices starting from £89,105 It produces 435hp and 520Nm of torque and uses an integrated starter-generator powered by the 48V on-board electrical system, allowing some mild hybrid functions. S500 delivers between 31.7 and 32.5mpg for the long wheel-base variant) and emits 184 g/km of CO2. Our test drive was reassuringly close to the quoted figure – 29.8mpg.

The new S-Class is an immensely impressive technological tour de force. Mercedes has focused on functionality rather than radical restyling of the concept. The S-Class has high levels of safety and massive improvements in ride and refinement, As a driver’s car, it might have even leapfrogged its traditionally more front seat-focused rivals too.

With a bristling array of technology, we barely skimmed the surface of the car’s capability in a couple of hours on the road. It’s certainly different from traditional Mercs in terms of how it operates – this car seems to represent a break from the previous generation of system, and it might take some getting used to.

It’s such a shame that the plug-in hybrid is not part of the launch range. Until it arrives, Mercedes will find its sales in the chauffeur sector restricted to non-licensed private chauffeurs. On the other hand, Mercedes might have got the timing right – as the chauffeur market might be showing signs of post-Covid recovery by the second half of 2021, when the PHEV is scheduled to launch. It should be worth waiting for.