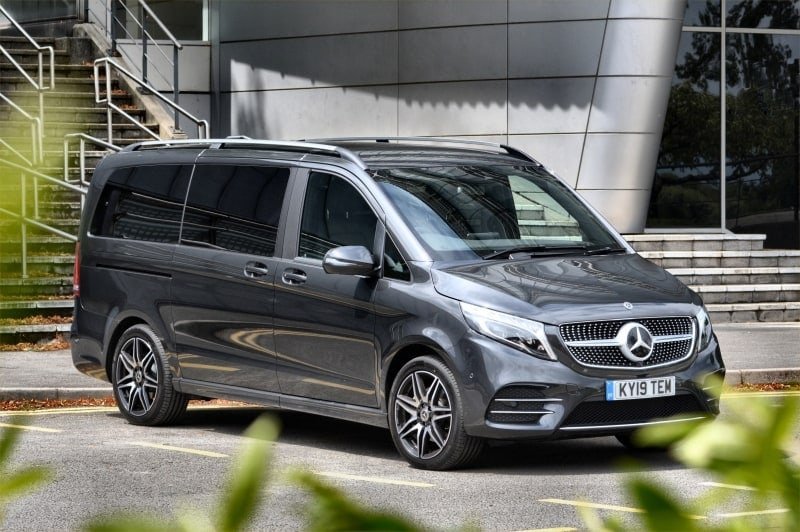 Car of the Year

Our Professional Driver Car of the Year for 2019 is the Mercedes-Benz V-Class. It’s the first time an MPV has captured the overall crown, and the decision says a lot abut changing work patterns in the industry – and the sheer strength of this vehicle in its class.

The Professional Driver Car of the Year is chosen from our nine category winners. This year’s shortlist was a very impressive selection, including a number of new models that won their classes at the first attempt – so several cars made a strong case for the overall win.

But the V-Class got the nod as Car of the Year because of the margin of victory over its class rivals. In fact, over the past couple of years, it’s dominated the voting in the MPV category.

The V-Class offers exceptional versatility as anything from an events shuttle to an aircrew transporter to a mobile boardroom. It offers high levels of comfort, massive luggage space – 1,000 litres on this version; even more with the extra-long body. And of course, it has that crucial three-pointed star on the grille.

This engine also gives much-improved fuel economy, Mercedes claims – 44.9mpg-47.9mpg on the new WLTP test cycle. And for the first time in the V-Class, a nine-speed 9G-Tronic automatic transmission will be available in place of the previous 7-speed box.

Standard safety features include Crosswind Assist, derived from Mercedes trucks, and a new Active Brake Assist system can now detect the risk of a collision with a vehicle in front. All this combines to make the Mercedes-Benz V-Class our unequivocal winner for 2019.

Private Hire Car of the Year

This award has been won five times by the Skoda Superb, but with that car on model change, the field was wide open.

Our clear winner is the Vauxhall Insignia Grand Sport. It’s a car that comes close to matching the Superb’s class-leading rear seat space – and it’s a great car to drive too.

Runner-up was one of the most popular private hire cars of the past decade – the Skoda Octavia. Low running costs and excellent packaging on a relatively small car make this a favourite – and with a new version due in 2020, it’ll continue to be a strong player.

In third was last year’s winner – the Toyota Prius. It’s still the go-to car for low running costs and fuel economy, and it highlights the stupidity of TfL’s ULEZ rules that it won’t be possible to register one as a new PHV in London from January.

MPV of the Year

This market has changed a lot over the years, with car-based “minivans” fading away and van-based people-movers becoming the standard.

Our 2019 winner, for the third year running, is the Mercedes-Benz V-Class. With a class-leading combination of high build quality and cavernous interior space, coupled with a vitally important prestige brand and new improved engines this year, the V-Class has really created a class of its own.

Runner-up is the vehicle that poses the closest challenge to the V-Class as a luxury MPV. The Volkswagen Caravelle Executive is well-built – and it’s about to be upgraded again. But a lack of LWB option weighs against it.

In a surprise third place was the BMW 218d Gran Tourer. This overlooked car is a practical and well-built vehicle with low running costs. And it can carry seven people in an interior that is not that much smaller than a Ford Galaxy.

Green Car of the Year

This year we’ve decided to split two of our categories into cars suitable for private hire and cars of an executive chauffeur standard. So now there are two Green awards, as well as two Estate Car awards.

To qualify as a “green” car, we’ve set the bar pretty high – the next two categories are only open to vehicles that meet TfL’s ULEZ rules from 2020. So that means plug-in-hybrid or all-electric drivetrain

If you want to register a new private hire car in London, you don’t have a lot of choice. But the Kia e-Niro ticks all the boxes – it’s affordable, it has a 240-mile range, enough for a couple of days’ work, and it’s roomy and comfortable. And in 2020, Kia should have sufficient supplies of the car to meet demand.

Runner-up was the Hyundai Ioniq EV, which was voted our Green Car of the Year in 2017. It doesn’t match the latest EVS n terms of range, but it’s an extremely practical car for private hire work. Indeed, the plug-in hybrid version of the Ioniq came third in the voting.

As with the Green Private Hire category, only plug-in-hybrid or all-electric vehicles that meet TfL’s ULEZ rules from 2020 are eligible.

The luxury automakers have been quick to develop plug-in hybrid versions of executive and chauffeur saloons. With striking looks, and incredible levels of luxury and refinement, our green executive winner is the plug-in hybrid BMW 745Le. In terms of running costs, it’s not far off the diesel 7-series either.

Mercedes-Benz also has a plug-in S-Class, but the S560eL is a more expensive vehicle, pitched as a range-topper rather than as a diesel replacement. Impressive quality and refinement earned it second place.

In third was BMW’s smaller plug-in hybrid, the 530e, which perhaps surprisingly edged out rivals from Mercedes and Volvo.

Luxury SUV of the Year

The world is becoming SUV shaped, and many chauffeurs know that a lot of their clients, especially from America and the Middle East, prefer an SUV to a saloon.

Our winner is the BMW X7. Launched this year, it is a genuine six-passenger luxury vehicle that is capable of competing with Range Rover’s traditional market leader, but with operating costs that match a large chauffeur saloon.

In second place is the car that won this category in 2017. The Volvo XC60 is very roomy for its overall size, and with very low running costs and improved mild-hybrid powertrains, it’s an impressive vehicle.

In third was last year’s winner, the Audi Q8. It’s an exceptional drive and a very well-made car, but with just two seats in the rear it perhaps lacks the flexibility that the X7 offers.

As with Green car, we’ve split our Estate Car category in two – private hire and executive. For many private hire operators, an estate gives more versatility than a saloon – especially if you’ve got to carry passengers with luggage.

In terms of car for pound, you really can’t beat our winner, the Kia Optima Sportswagon. It’s a big vehicle with lots of loadspace – exactly what the judges were looking for. And with good fuel economy and low running costs, it’s an ideal private hire choice.

Runner-up in the judging was Peugeot’s new 508SW, which impressed with build quality and style, though seemed a little tighter in the rear compared to the Vauxhall.

In third place was last year’s Estate Car of the Year winner, the Mazda6 estate. The Mazda 6 gained a thorough facelift in 2018, with a much-improved interior and a major upgrade to satnav and systems, giving it an excellent specification for a volume car.

Estate Car of the Year – Executive

There are areas in which an estate car can beat a saloon – such as rear headroom and boot space, and that applies to executive chauffeuring as well as regular private hire work. So we’ve created a new class to recognise the more up-market station wagons on the market.

And the unbeatable combination of practicality and driveability means the award goes to the BMW 520d Touring. This car won the Estate Car of the Year category on two previous occasions, and it’s interesting how much more rear seat room the estate appears to offer over the 5-series saloon. Great driveability helps too, as you’d expect from a BMW.

Runner-up was the Mercedes-Benz E220d estate, by a narrow margin. The two cars have very similar operating costs, and a different combination of judges could easily have flipped the result.

In third was Volvo’s V90 T8 plug-in hybrid. This has the advantage of being street legal as a newly-registered PHV from January, but in the minus column is a high purchase price and higher operating costs than its diesel rivals.

Executive Car of the Year

These cars are the lifeblood of the chauffeur sector – and this is a very competitive sector. Over the years BMW, Mercedes, Audi and Volvo have all taken the honours.

Voting was very close indeed – just five points separating the top five. But it was the newest contender that took the award. The Audi A6 was launched last year and scores well for features, space and driver assistance technology.

The diesel Audi outscored its German plug-in hybrid rivals from BMW and Mercedes-Benz. High levels of refinement and driveability scored well for the BMW 530e, which uses a petrol engine combined with an electric motor.

This narrowly edged out Mercedes-Benz’s latest PHEV, which is unusual in that it uses a diesel engine rather than a petrol, like most PHEVs. This gives the best running costs and fuel economy in the category, but the car lost points for the restricted boot, as a result of the battery pack’s placement behind the rear seats.

Chauffeur Car of the Year

If you thought the executive car class was close, how about the chauffeur category? Less than two points separated the top four cars – and we saw an interesting fight between diesels and plug-in hybrids.

The final scores were very close between the various BMWs, Mercedes and Audi models – in the final analysis, it was a combination of comfort and features that elevated the Audi A8L – one of the diesels – over its rivals – but only just!

In second place by a fraction of a point was another diesel, the Mercedes-Benz S400L, the latest version of the class benchmark S-Class. This scored highly for refinement, but the A8L was in the main judged to be the better car to drive.

The BMW 745Le plug-in hybrid, our Green Executive Car of the Year winner, was third, narrowly ahead of the diesel B<W 730Ld. Running costs over five years are judged to be better for the PHEV, and this actually flipped the results. On test drives alone, the diesel scored higher than the plug-in.