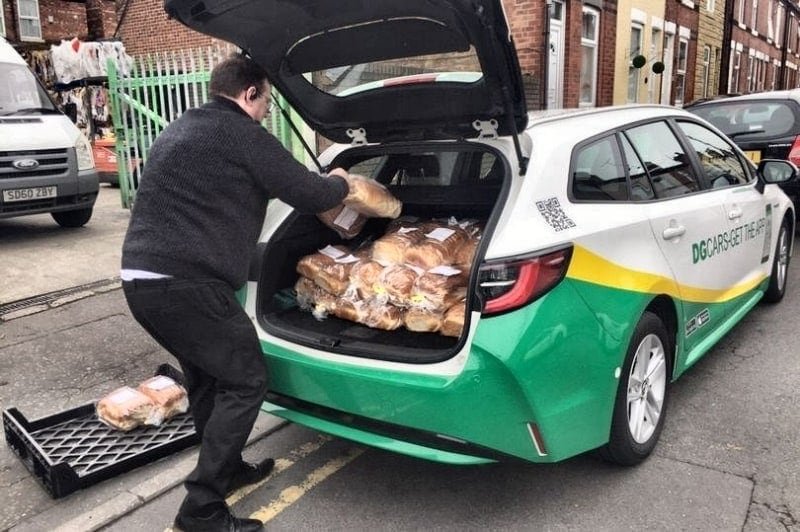 Britain’s private hire and taxi drivers are emerging as unsung heroes of the Coronavirus crisis, providing essential deliveries to elderly and vulnerable people. And many operators are transporting NHS workers to and from work, in a cleaner and safer environment than public transport.

Operators large and small are making vehicles available without charge to help out their communities. In Nottingham, leading operator DG Cars has been delivering two pints of milk and a loaf of bread to the elderly and front line NHS workers since March 19, and says it will continue to do so for as long as it can.

The food is being supplied by local firms Chunky Chicken Nottingham and Pak Foods, and DG Cars is paying its drivers to make the free drops. Any food left after 4pm is being delivered to a homeless shelter.

Gateshead-based Dean Taxis has donated £3,000 to Age UK Gateshead to help purchase care packages for the elderly, which are being delivered free by the company’s fleet of cars. Dean Taxis Director Rob Armstrong said: “Now is the time to think of the vulnerable, the elderly, and those who have nobody to care for them and to do something about it.”

And the company is offering free rides to the supermarket for elderly customers, so they can take advantage of dedicated specific opening times.

Dean Taxis and other local north-east operators including Wallsend’s Blueline, are also helping food parcels for people self-isolating from the virus. The food parcels, containing items such as bread, milk and vegetables, cost between £7.50 and £10, are put together by JR Holland Food Services, and drivers from Dean Taxis and Blueline will deliver them for just £4 in a five-mile radius of the food depot, or an additional £1 per mile if residents live further away.

Blueline is also helping out NHS workers by offering £25,000 worth of free taxi rides. NHS key workers can message the Blueline Facebook page with an image of their NHS badge to claim a voucher.

Blueline finance director Tom Shanks said the company wanted to “show our admiration for the incredible work and dedication of NHS workers. He added that the company was helping drivers by reducing the cost of renting cars for self-employed staff.

“The business is massively subsidising our drivers as this crisis continues to do the most we can to support them. We have strong family values and this is what we believe is the best thing to do,” he said.

The youngsters from John Spence Community High School in North Shields are getting packed lunches delivered free of charge by Radar Taxis – in the first week, more than 1,000 packed lunches have been delivered.

Head teacher Jonathan Heath had called Radar Taxis to see if they could deliver packed lunches: “I was hoping for a discounted rate for the deliveries, but midway through the phone call a director of the firm, Eddie King, made it clear that he wanted to help and that there would be no charge.”

In Manchester, Street Cars, the company that hit the headlines by rescuing stranded concert-goers after the Manchester Arena bombings in 2018, is collecting and delivering collect groceries from supermarkets for those unable to make it to the shops due to self-isolation. The service is free for the over-65s. Managing director Aqeel Arshad said: “We have to stick together at testing times like these and help as many people as possible.”

In Blackburn, Lancashire, only one private hire company is still running after all other operators decided to pull their fleets off the roads.

But Mill Hill Private Hire is continuing to operate “to provide essential transport for NHS Staff and key workers who need to get to and from work and the general public who need to go out for basic necessities, appointments and work.”

In a statement, the company said: “We are not being irresponsible as we provide vital NHS patient transport. The NHS is stretched to the limit and we will carry on trying to help as much as possible. All our drivers have been issued with gloves, antibacterial wipes and hand sanitisers. Vehicle handles and surfaces are wiped down prior to each journey.”

TwitterFacebookLinkedInEmail
Posted in News
← Veezu continues expansion in Leeds as Amber Cars acquires local rival Premier CarsAll Veezu operations to offer 20% discount for NHS staff →
We use cookies for various purposes including analytics. By continuing to use the service, you agree to our use of cookies. - Cookie Policy