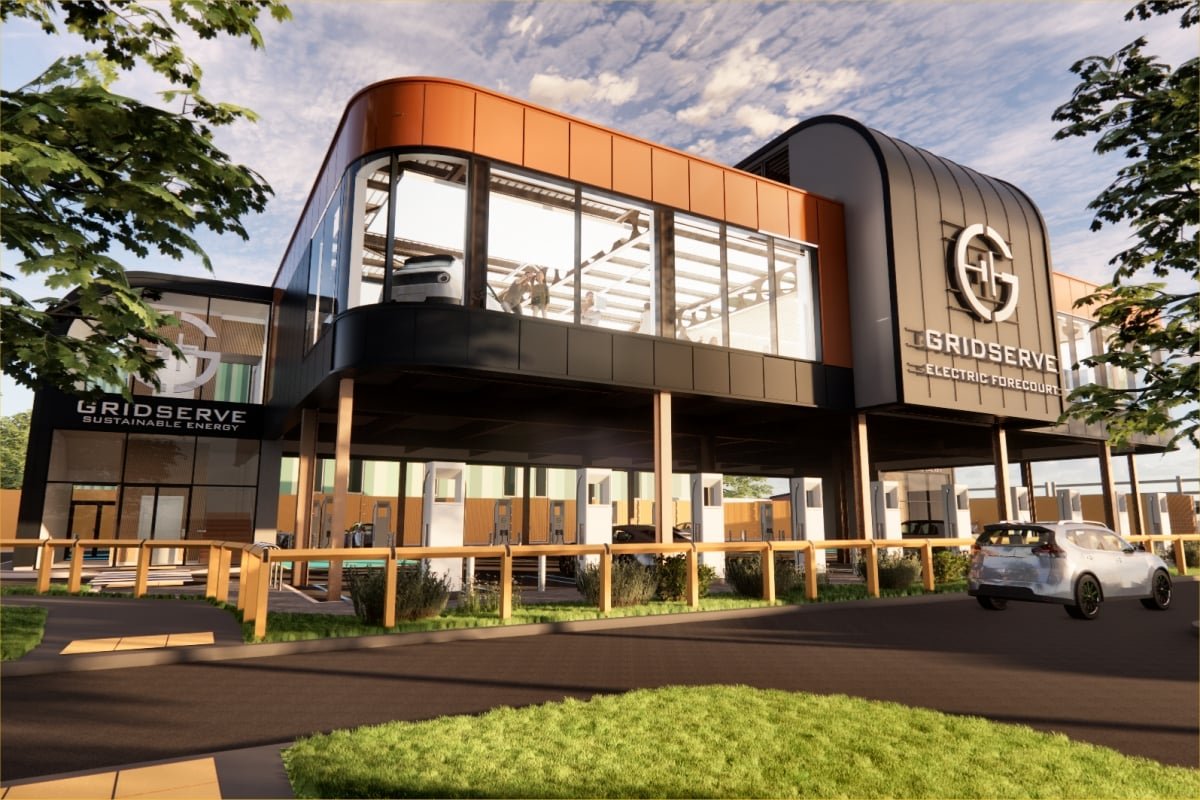 Gridserve has announced it will build more than 20 new EV charging hubs across the UK motorway network in the first half of 2022.

In addition, it plans to open ‘Electric Forecourts’ at Gatwick and Norwich international airports. These will follow the blueprint of the Gridserve’s first Electric Forecourt in Braintree, Essex, which opened in 2020.

Gridserve says the moves are the biggest upgrade of motorway EV charging infrastructure in UK history. Each ‘Electric Hub’ will feature between 6 and 12 350kW ultra-high-power chargers with contactless payment, capable of adding up to 100 miles of range in less than 10 minutes. These will replace old Ecotricity chargers following Gridserve’s takeover of Ecotricity in June 2021.

Since the acquisition, Gridserve has invested tens of millions of pounds in the network to develop the new Electric Hubs, as it replaces the 300-plus motorway chargers it inherited from Ecotricity, and install 130 additional AC chargers to cater for all types of EVs.

Gridserve said the majority of the 20 new Electric Hubs will be installed by the end of March, and a second phase of a further 50 sites will follow.

The Gatwick Airport Electric Forecourt site is the first in the world to be hosted at an international airport. This, and the one at Norwich airport, are under construction and are due to open in 2022.

Gridserve said some of the Electric Hubs would be located in areas traditionally left behind in the EV transition, including Wales and Cornwall.

Since the acquisition, GRIDSERVE has invested tens of millions of pounds in the network to develop the new Electric Hubs, replace the 300+ existing motorway chargers it inherited from Ecotricity, and install 130 additional AC chargers to cater for all types of EVs.

Toddington Harper, CEO of Gridserve, said: “Our mission is to deliver sustainable energy and move the needle on climate change. Getting people into electric vehicles is a big part of our vision, but to do that, charging has to be simple and free of anxiety.”

The Gatwick Electric Forecourt has been developed in partnership with Gatwick Airport. It is located on the Ring Road South approach to Gatwick’s South Terminal and adjacent to the M23. It will enable 36 EVs to be charged simultaneously, with high-power chargers that can deliver up to 350kW of charging power, capable of adding 100 miles of range in less than 10 minutes. Multiple charging connectors will cater for all types of electric cars.

The site is due to open in autumn 2022 and will host a café, waiting lounge with free WiFi, convenience supermarket, children’s play area and a dedicated educational space to increase awareness around electric vehicles. The Norwich Electric Forecourt is scheduled to open in April 2022, will mirror the setup at Gatwick.

As with all of Gridserve’s chargers, the site will also be supplied with low cost, 100% renewable net zero carbon energy generated by Gridserve’s own solar farms.

Harper added: “Gatwick isn’t just an airport, it’s an ecosystem of commuters, travellers, staff, taxi drivers, car rental companies, local residents and businesses, all culminating in a transport hub that hosts tens of millions of drivers every single year. The Gatwick Electric Forecourt will give these drivers and businesses the confidence to switch away from petrol and diesel cars, making electric journeys to and from one of the country’s most important transport hubs straightforward and sustainable.”