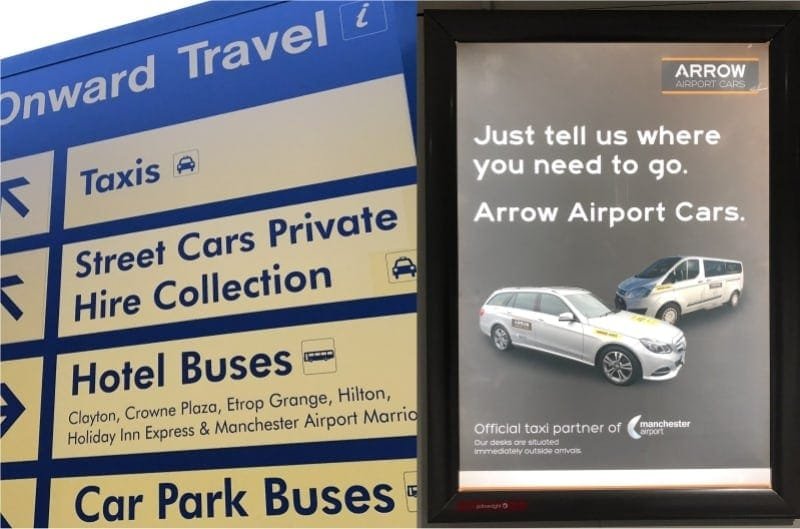 Street Cars Manchester has replaced Arrow Cars as the resident private hire operator at Manchester Airport. The move is a major coup for Street Cars, founded in Manchester in 2002, and winner of two Professional Driver Gold QSi Awards. Arrow had held the Manchester contract for the past five years, and had invested £700,000 in vehicles to operate the service.

Meanwhile the blow of losing the deal has been softened for Arrow Cars, as the Leeds-based company has won the contract to operate a private hire service at Newcastle Airport.

Street Cars has taken over the Manchester contract, with booking offices at all three terminals at Manchester Airport, and a further office located at the transport interchange – though Arrow’s posters were still up inside one of the terminals last month.

Street Cars Manchester is promising passengers a range of vehicles to suit their journeys with a new fleet of hybrid cars, people carriers and Mercedes-Benz executive saloons all set to be based at the airport.

Aqeel Arshad Street Cars, operations director, said: “We will still be offering the highest level of service which we are known for and we will still be operating as usual within the city of Manchester.”

Arshad said five companies were shortlisted under the tendering process. Having won the contract, he said Street Cars had taken on most of the Arrow drivers, and had started purchasing cars specifically for the contract. “We have about 70 cars at the moment, and we want to have 150. We told the airport all our cars would be either hybrid or Mercedes, with free wifi in all cars.”

The Street Cars Manchester Airport cars are specifically branded and will only operate from the airport. There are dedicated pick-up spaces outside each terminal, as well as a holding area for cars waiting for a booking.

At Newcastle, Arrow Cars has replaced local Airport Taxi Association black cabs as the main service provider at the airport. Airport officials say that Arrow offered the best service after a “comprehensive” tender process. The move means that passengers will no longer be able to hail a cab outside the airport, but will instead have to book a journey online, over the phone, or at a booking office inside the terminal building.

An airport spokesman said: “The tender process for the provision of taxi services at the airport took into account a wide range of criteria and a comprehensive review of all applicants was carried out. Following this Arrow Cars was awarded the contract.”

“Arrow Cars scored highly in the process due their product offering, use of the latest technology and investment in a new fleet of vehicles – including those with disabled access. Their wheelchair accessible vehicles will be available for any driver to use when required.”

Local taxi operators are unhappy with the decision. Taxi driver Amir Ahmed told a council meeting: “The Newcastle Airport decision will mean that 129 taxi drivers from various councils will lose their livelihoods. It will deprive passengers of choice in meeting their transport needs, as well as causing inconvenience for the travelling public, especially for those with disabilities, and will probably increase fares.”

Arrow Cars said it had recruited a large number of drivers from the north-east including a number from the Airport Taxi Association. Arrow won the contract to run Birmingham Airport’s car service last year, and has existing contracts for Leeds-Bradford, East Midlands and Bristol airports.