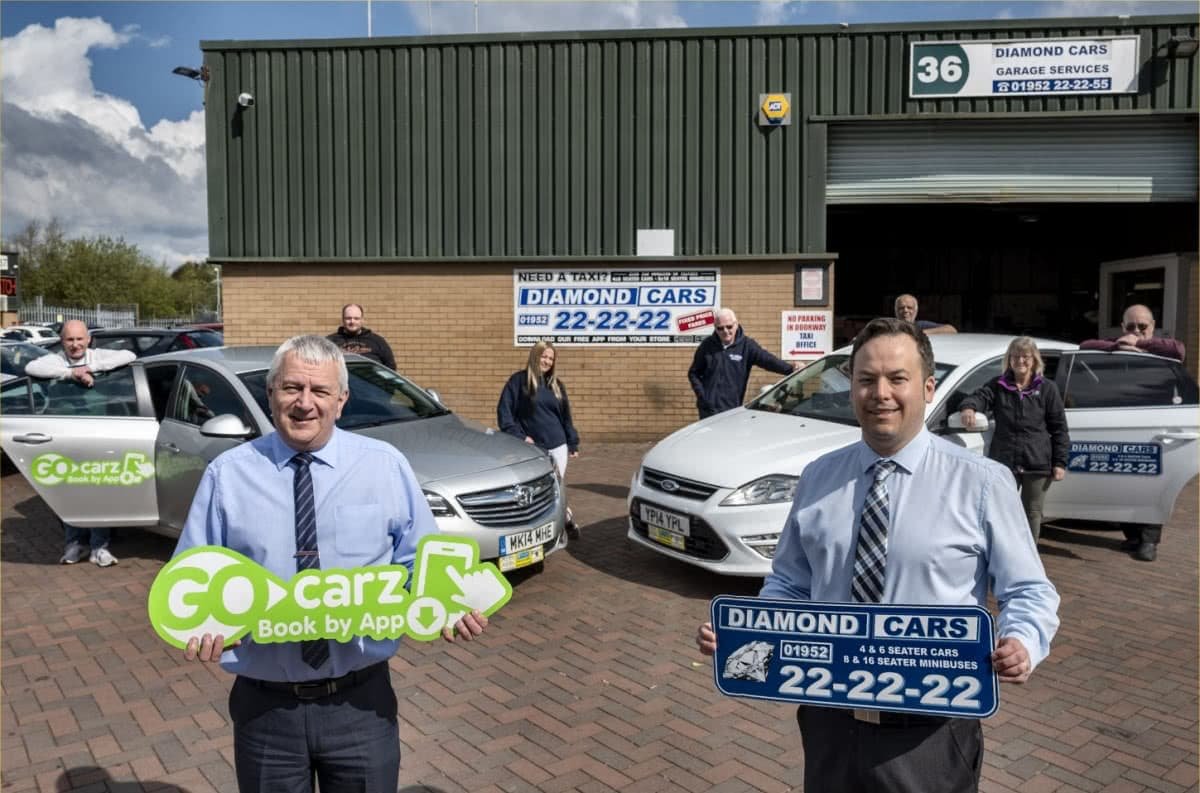 Veezu has strengthened two of its five major UK hubs by acquiring local competitors in Shropshire and South Wales, and the company is targeting further takeovers in 2021.

Go Carz, Shropshire’s largest private hire and taxi firm, has taken over Telford’s Diamond Cars, adding 270 vehicles and creating a 650-strong fleet of licensed vehicles in Telford. The Diamond Cars brand has been discontinued and all the cars are now under the Go Carz brand.

Diamond Cars founders Linda and Nigel Horler will oversee the transition to Go Carz and retire after 31 years in the business, but their son Dan, a driving force in the Diamond Cars business for many years, will join the Go Carz management team.

Veezu regional director Graham Hoof (pictured left, with Dan Horler) said: “We are delighted that Diamond Cars and Go Carz are joining forces and look forward to working with Dan. We now have more cars all operating from one system which means passengers in Telford can expect an even better service.”

The deal will give Go Carz increased capacity at peak times, and will help local driver-partners by reducing the dead mileage between bookings. The existing Diamond Cars telephone numbers are being retained, but app bookings will now be via the Go Carz app.

Veezu regional director Jack Price said: “Not only will the acquisition enhance service levels for residents and businesses across the Vale of Glamorgan, but it will also bridge our coverage between our existing operating areas of Cardiff and Bridgend.”

Veezu has four other major service hubs throughout the UK, each operating under established local brands – A2B Radio Cars in the West Midlands, Amber Cars in Leeds, Go Carz in Shropshire and V Cars in the South West.

Nathan Bowles, Veezu CEO, said: “It is a clear signal to the market that we are accelerating plans for further growth. As the UK’s leading private hire technology platform, we have an unrivalled reputation for successfully integrating private hire firms into our business.”

Bowles added that Newport-based Veezu, would target several more acquisitions before the end of 2021. “We want to grow our position as a market-leading technology innovator and private hire platform. We are now identifying the next wave of acquisitions and are seeking several more private hire business owners looking to sell,” he said.

TwitterFacebookLinkedInEmail
Posted in News
← Glasgow Private Hire and Hampden Cars merge to form ‘invincible’ GlasGO CabsOla strengthens UK Board by recruiting Sir Mike Rake and former TfL executive Leon Daniels →
We use cookies for various purposes including analytics. By continuing to use the service, you agree to our use of cookies. - Cookie Policy