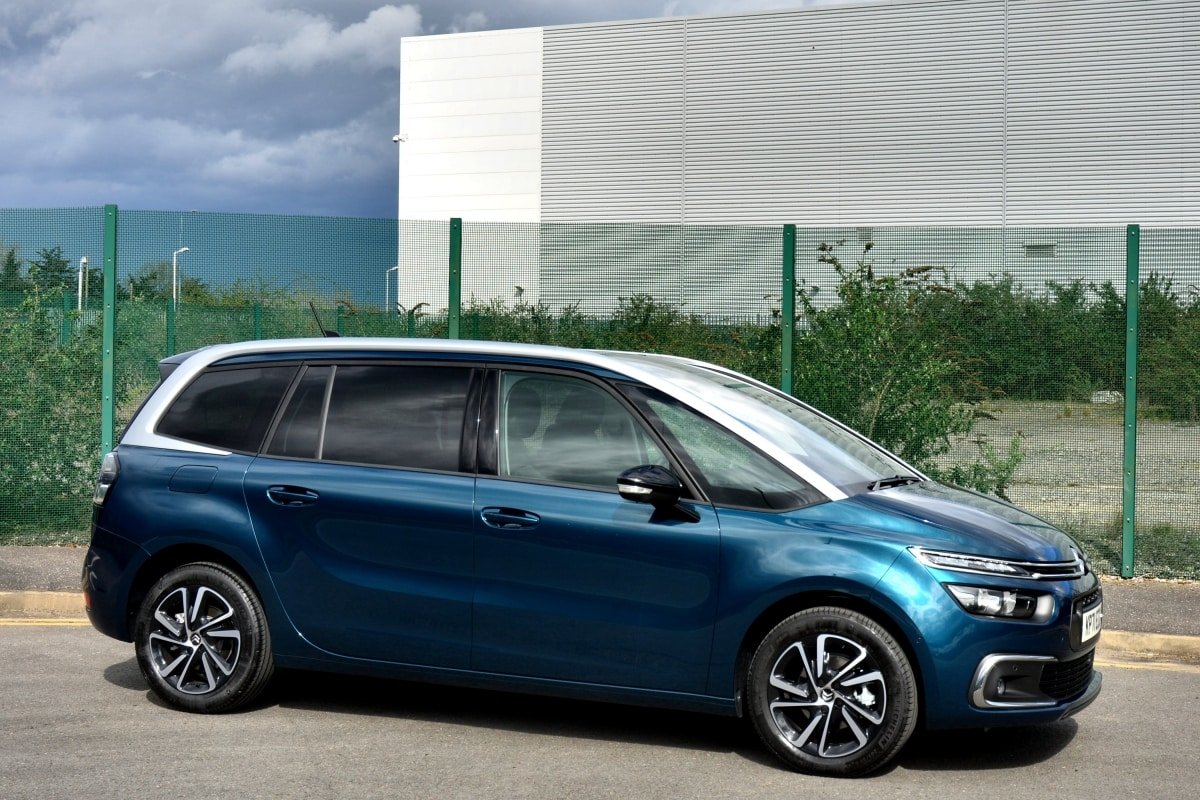 When we last tested this car’s predecessor, the C4 Grand Picasso, eight years ago, the MPV already felt like an endangered species, replaced in the public’s want list by more aggressively styled SUVs.

Now, it really does seem like the end of days for the one-box car-based people-mover. The VW Sharan and Touran have gone; the Ford Galaxy and S-Max are hanging on, but only just.

And now the Grand C4 Space Tourer (the Picasso name was dropped in 2018) is reaching the end of the line. Production ends in July, and the replacement will be – you guessed it – an SUV. It’s a shame, because SUVs still make somewhat uncomfortable bedfellows in private hire and taxi fleets. For our kind of work, the C4 Grand Space Tourer makes a lot of sense.

Smaller wheels and a less macho stance makes access a lot easier than a comparable SUV. And it’s very roomy inside – at least when operating as a five-seater. There is a third row of two individual seats, which folds away into the boot floor. But these are pretty small, and really they are child seats. The C4 Grand Space Tourer is primarily designed as a family car – its main rival would be S-Max rather than Galaxy.

Last October Citroen axed the low-selling base model from the range, leaving just two trim choices, Sense and Shine. Range-topping Shine variants are the most popular, accounting for 60% of sales, and that’s what we are testing here.

Sense variants come with 17in alloy wheels, a reversing camera and integrated aluminium roof bars, as well as a 12in HD central display screen and a 7in touch screen satnav, with Android Auto and Apple CarPlay as standard. Citroen Connect Nav is also included, with three-years of live traffic updates.

Shine adds a panoramic sunroof and Xenon headlights, along with adaptive cruise control, blind spot monitoring and lane departure warning. A nice touch is a secondary rear-view mirror, allowing a widescreen view of the rear cabin.

So what you’re looking at is a roomy five-seater shuttle with occasional seven-seater capability. Some councils might be loath to licence the car as a seven-seater, though access to the third row is pretty good as the second row seats slide forward and tilt. The third seats are easy enough to extract and stow, and they fold away to leave a nice, flat floor and plenty of luggage space – 793 litres with the seats stowed.

As a seven-seater, you lose nearly all of this – leaving just 165 litres, only enough for a couple of small bags. Because of the foldaway seats, there’s no spare wheel – just an inflator kit.

There’s lots of legroom and headroom in the three-seat second row, but the individual seats are narrow and not particularly comfortable – the bases are firm and lacking in padding. OK for short-range urban work, but less comfortable on a motorway run.

Driving position is good, with the A-pillar split into two slender pillars, giving excellent visibility. Front seats are comfortable, though there’s no lumbar adjustment. As with previous Citroen MPVs, there’s no conventional instrument cluster. Instead a configurable digital panel is centrally mounted, with a secondary touch screen below for sat-nav and other functions such as radio and heater. Simple to navigate and clear to read.

The main widescreen display is nice and clear, and it contains the trip computer as well as pop-up screens for parking cameras.

As this is a relatively old design, Citroen hasn’t tried to electrify the model’s range beyond stop/start. There are only two engines on offer – a 1.6 diesel and a surprisingly peppy and competent 1.2-litre, 3-cylinder petrol, on test here, mated to an 8-speed automatic gearbox.

This is not the fastest-shifting box around, so the car lends itself to gentle driving. A good thing, as the suspension is soft and the car tends to wallow on acceleration, especially when it changes up. A light right foot will bring rewards in terms of comfort and economy.

There’s a fair amount of body roll too – this is not a car to chuck around. But it’s surprisingly agile around town, with a good, tight turning circle.

On test we achieved 42.1mpg at 30mph over around 200 miles of mixed driving. Precisely the same fuel economy as the WLTP figure – for once, the official data is on the money! It was also comparable to the diesel version we tested back in 2014 – 42.7mpg.

Ridiculed as boxes on wheels when they first appeared, the MPV flowered briefly and then got trampled by the outsized wheels of the SUV trend.

A shame – the concept is particularly suitable for taxi and private hire work, with room for four adults and plenty of luggage. SUVs don’t have quite the same practicality, so I expect we’ll see growing nostalgia for proper MPVs in the not-too distant future.

The Grand C4 Space Tourer is one of the last non-van-based MPVs on the market, and it’s still a handsome, rather futuristic machine with much to commend it as a people-mover with very good operating economics.

So if you’re in the market for a replacement MPV, don’t hang around. There are still supplies in the network, but production finishes in the summer, and when they’re gone, they’re gone.