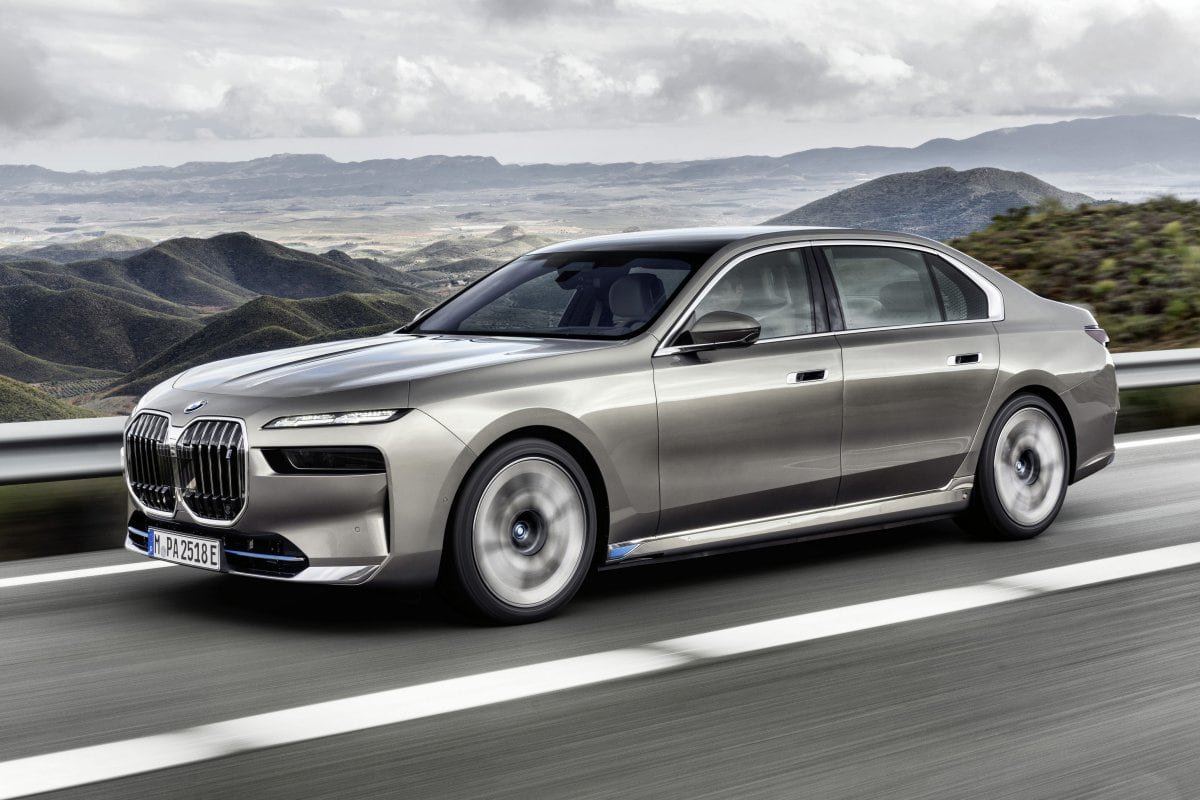 Chauffeurs will finally be able to specify a fully-electric large saloon later this year when the new BMW i7 goes on sale.

The i7 forms part of an all-new 7-series range, giving BMW a crucial advantage over rival Mercedes-Benz, whose new S-Class does not have a battery-electric option, only a plug-in hybrid. Mercedes offers the new EQS as its top-line electric option, but the car’s low roofline and hatchback body has fallen short of chauffeurs’ expectations.

By contrast, BMW has not deviated from the tested formula for its biggest saloon, and has simply produced an electric version of the 7-series as part of a new range – in which plug-in electrification will be available on all models.

The new 7-series range is available exclusively in long-wheelbase form, with two trim levels, M Sport and Excellence. The all-electric i7 xDrive60 is the launch model, with first deliveries this December, priced from £107,400.

BMW 750e xDrive and M760e xDrive plug-in hybrid models to follow in spring 2023, while a flagship i7 M70 xDrive model will follow later in 2023. All models have air suspension and active steering, with the rear wheels turning by up to 3.5 degrees.

The 7-series PHEVs will offer 50 miles of electric range when fully charged. They feature high-voltage batteries that can store 18.7 kWh of usable energy, an increase of more than 50% compared with the current 745Le model. Maximum charging capacity has climbed from 3.7 kW to 7.4 kW, enabling the high-voltage battery to be fully recharged from empty in less than three hours. Even on a conventional domestic power socket, a full vehicle charge can be completed in 9 hours.

The i7 includes some considerable upgrades on the old 7-series. The separate satnav screen, criticised for being too small in the previous model, is replaced by a curved, widescreen display similar to that seen on the iX and i4 EVs. The digital screen grouping consists of a 12.3in information display behind the steering wheel and a 14.9in control display screen, both incorporated into a single unit behind a shared glass surface.

Below the curved display screen grouping is an “interaction bar” to control some of the on-screen functions. The rotary controller for the infotainment system is retained on the centre console next to the gear selector.

Rear-seat passengers will be able to watch a huge 31.3in widescreen “theatre screen” that folds down from the roof and spans the rear cabin. This has an 8K display and includes integrated Amazon Fire TV.

A digital control unit is integrated into the rear door trim. This 5.5in touchscreen colour display allows passengers to select their choice of entertainment programme, the image display and the volume when using the Theatre Screen.

Reclining rear seats are also optional, including foot rests that are integrated into the seat base. A panoramic glass sunroof is fitted as standard on all models. This consists of a single fixed glass surface framed by a steel surround. The transparent surface is larger than that of any rival and also much longer than on the outgoing 7-series.

Automatic doors are available as an option. To open or close the front and rear doors, occupants simply touch the handles or the buttons in the interaction bar. The opening and closing sequence can also be activated using the radio-operated key. A collision protection function is fitted when opening the doors.

The optional Executive Lounge rear seating, offered as part of the Executive Pack, includes a reclining function with integrated leg rest for the space behind the front passenger seat, plus an optional quilted and heated armrest with high-quality glass insert and integrated smartphone tray for inductive charging.

Coordinated adjustment of the backrest angle and backrest upper section angle, forward/back position and seat surface tilt enables an extremely comfortable reclining position. A torso angle of 42.5 degrees can be achieved between the seat surface and backrest.

Also unique is the design principle for the leg rest, which allows passengers to perfect a relaxed resting position. Here, the calf support fixed directly to the seat surface without a gap teams up with a heel rest extending out from the back of the front passenger seat.

Boot space looks adequate at 500 litres for i7 and 525 litres for 7-series PHEVs. The boot lid also has automatic opening and closing, activated by either the push of a button or the movement of a foot under the rear apron.

The front end has been restyled, with narrow LED headlamps replacing round headlamps. and additional LED outlining to the BMW kidney grille, giving a very noticeable “rear view mirror” appearance at night.

Headlamps are adaptive LEDs including cornering lights, plus matrix high beam and the selective non-dazzling high beam. The lamps incorporate Swarovski crystal glass to give a “twinkling” effect, including a distinctive “welcome” light display when the car is unlocked. LED lights integrated into the door sills project four graphics, one after the other, on to the ground, creating a “light carpet” effect.

One non-metallic and nine metallic colour shades can be ordered. Also available are four BMW Individual paint finishes, with further BMW Individual finishes set to follow at a later stage, including a two-tone paint finish with a choice of two colours above the shoulder line, and five shades for the lower section.