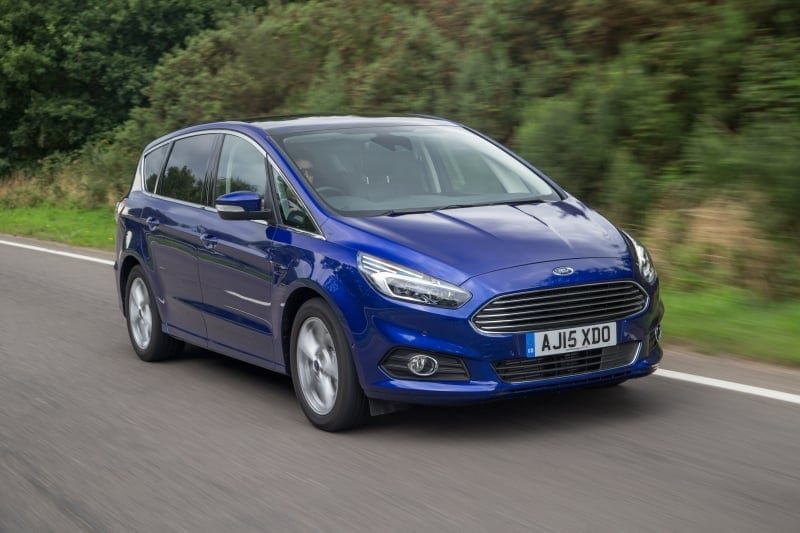 The third vehicle to derive form the new Ford Mondeo platform is the S-MAX. Overshadowed by the Galaxy as a Private Hire Vehicle, the more family-oriented S-MAX is nonetheless a highly competent people-mover.

It’s one of life’s mysteries why Ford developed two separate, very similar MPV models. Galaxy and S-MAX are mechanically the same – the more family-oriented S-MAX has a lower roofline and a slightly shorter body, but the basic wheelbase is the same, and both are seven-seaters. 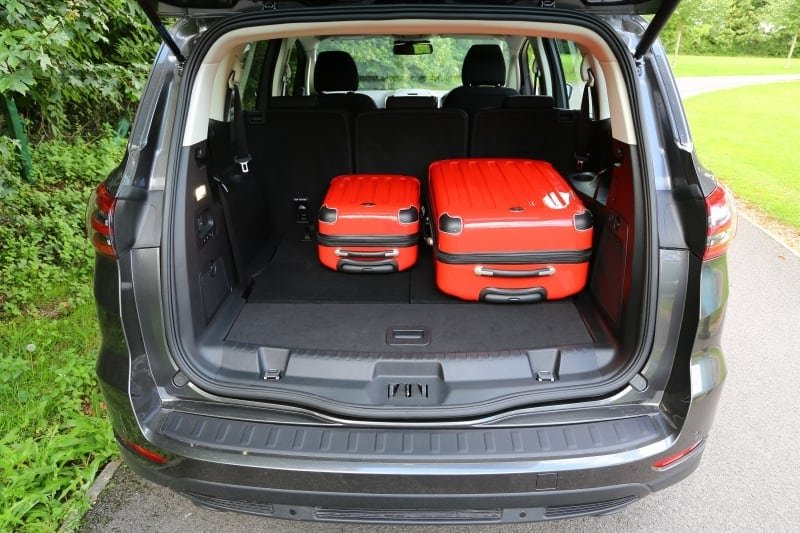 Most of the Galaxy’s functions and features carry across to the S-MAX, including easy-fold third-row seats that create a vast boot space when flat – at 700 litres it’s equal to Galaxy under the load cover. Even with the third row up, we could just accommodate our two standard cases – as we could on Galaxy. 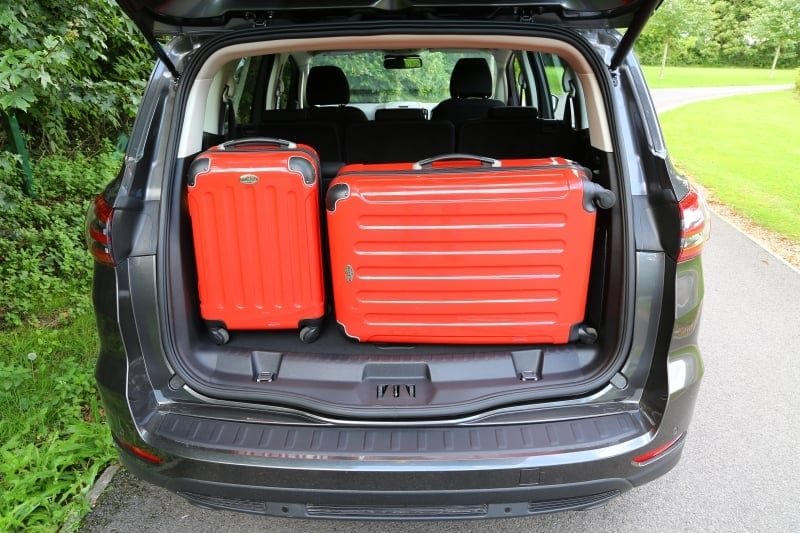 Even though there’s less headroom, that really only becomes an issue in the third row – which is rather more cramped in legroom terms too than the Galaxy. The S-MAX is really an occasional seven-seater – OK for children or smaller adults but a squeeze for seven adults.

Ford has published detailed interior dimensions form both its big MPVs, which makes an interesting read – headroom is between 40 and 50mm less in all three rows, but the second row of the S-Max actually offers more legroom and “hip room” across the seat base than the Galaxy. It could be argued that the S-MAX is actually the better five-seater, as the useable luggage volume is the same as the Galaxy with the third row seats folded away.

Indeed, we didn’t feel at all claustrophobic in the front or second row. In fact, it feels like you’re in a taller Mondeo rather than a lower-roofed Galaxy. From the driver’s position, you’re looking at the same dashboard layout in all three cars, with the same big central satnav and digital/analogue instrument panel.

The dashboard neatly incorporates digital information with analogue speedometer and rev counter gauges. A well-concealed colour screen links the two primary dials. In fact, only the graduated bezels are analogue – everything else, including the speedometer and rev counter needles, are part of the digital display. This integrates satnav instructions and radio information with the central satnav. 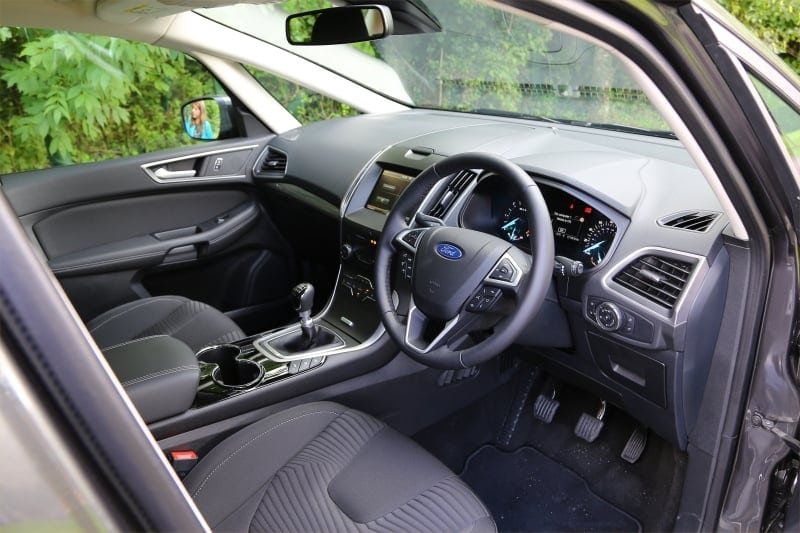 The dashboard layout is very much cleaner than before. Gone is the switchgear flanking the satnav screen. Now, apart from a large volume knob, only the air conditioning is controlled by separate switches and buttons A centrally mounted 8in touch screen controls satnav, infotainment, phone and climate control functions, and switches between the four just by taping a finger in one of the corners of the screen.

Maps are clear, with crisp typography, and navigation directions appear on the screen as well as on the dashboard display. 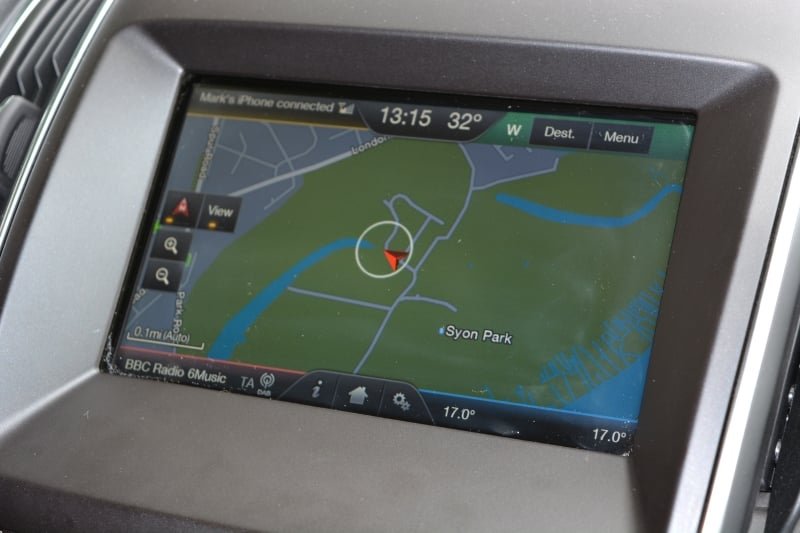 All the Galaxy’s impressive tech carries across to the S-MAX too, including the side-view panoramic front camera that is useful when pulling out of a side street with restricted view.

On-road handling and performance feels, inevitably, very similar to Galaxy. These are refined cars, with easy-shifting six-speed transmissions and low-revving engines with bags of torque – useful when you’re fully loaded.

Ford claims mpg and CO2 levels to be broadly the same. On test, we were as usual short of the quoted 56.5mpg combined figure. In fact we returned a slightly better figure on the 150PS S-MAX compared to the 180PS Galaxy 2.0TDCi we’ve also tested recently – 39.2mpg compared to 36.3mpg, both with manual transmission. However, neither MPV performed as well as the 180PS Mondeo we drove earlier in the year, which recorded an impressive 43.0mpg. 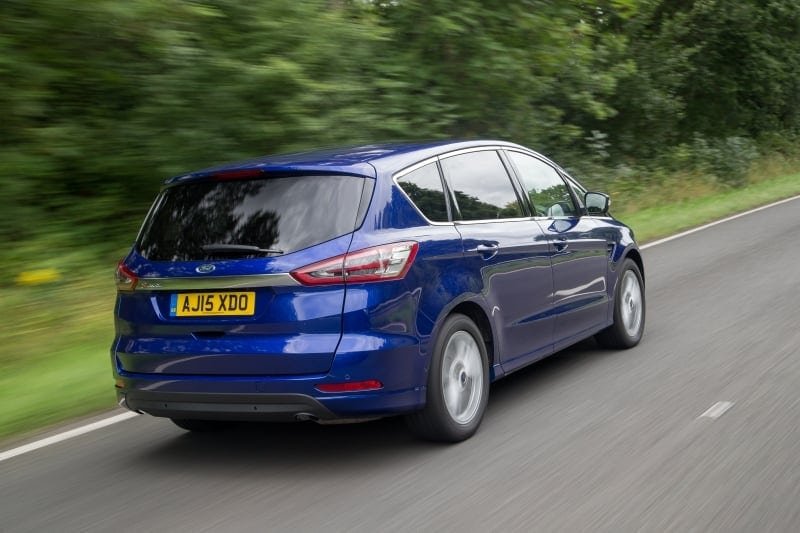 If you want a leather interior, you’ll need to go to Titanium. Bigger alloys on the more up-market versions do little to aid the ride, though.

S-MAX is a handsome MPV, with a wide stance and a lower roofline than many large people-movers. Ford’s new “Aston Martin” style grille suits the car too.

While the taller Galaxy has been the private hire operator’s seven-seater of choice for many years, the S-MAX can almost match it on most counts. Headroom is reduced, but still better than any saloon or estate. And while the third row of seats is notably more restricted, there’s actually more room in the legroom and width in the second row.

Luggage space isn’t compromised either – unless you’re piling up to the roof, the under-the-tonneau space is the same.

Remember too that there’s a model-for-model price premium of £2,350 if you want a Galaxy to the same spec as the S-MAX we tested here. And with a lot more S-MAXes than Galaxys sold every year, availability is likely to be easier – so you might find it easier to do a deal.