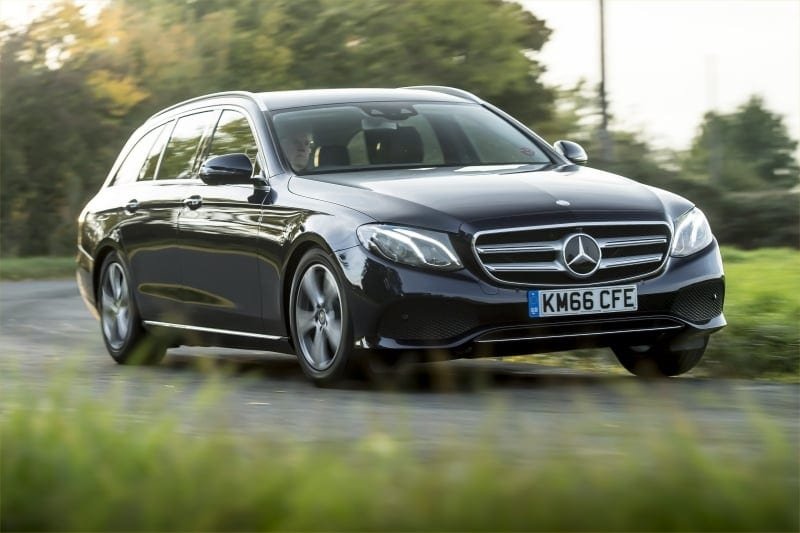 The new Mercedes-Benz E-Class has hit the ground running in the chauffeur market, winning the Executive Car of the Year award in last November’s Professional Driver awards.

That’s a good achievement against new competitors in the sector – new Jaguar XF and Volvo S90 went on sale in the past year or so, and a new BMW 5-series is just around the corner. A lot of sales in this sector are estates, and now, six months after the saloon, the E-class saloon has hit the market.

The Mercedes E-Class has now reached its tenth-generation, and this all-new version incorporates significant improvements in performance and luxury. Our test car was finished in dark blue and is kitted out in SE trim – the perfect specification for airport transfers and business chauffeuring.

This specification has a sensible basic price of £38,230, and our car was fitted with a couple of interesting option packs taking the on-the-road price up to £43,540. Three-zone Thermotronic air conditioning adds £750, and the Comand online satnav and connectivity system puts £1,495 on the price.

More importantly, the car is fitted with Drive Pilot, a near-autonomous driver assist system that costs £1,695, but is probably worth every penny. 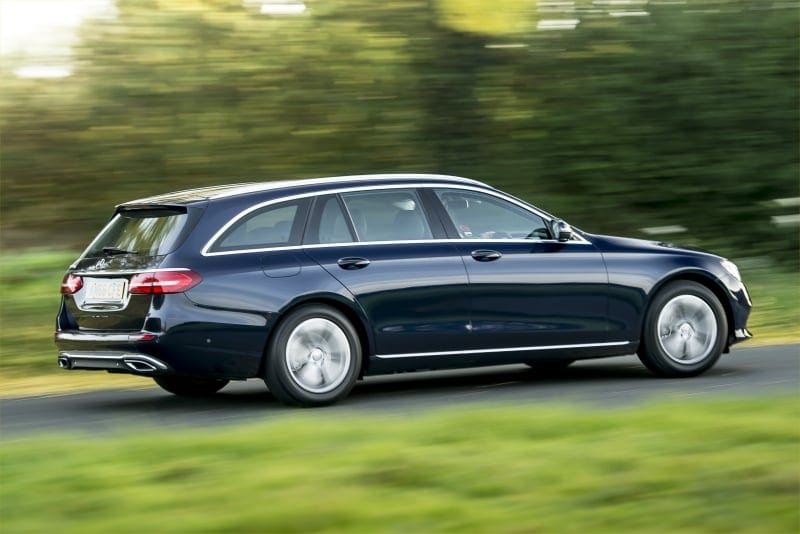 With 17in wheels, this represents the cleanest and greenest E-Class estate, for the time being at least. There is a lower-powered E200d version, it won’t come to the UK. The estate body’s greater weight means CO2 emissions are a little higher – 109g/km against the saloon’s 102g/km. Mercedes claims a rather fanciful combined fuel economy figure of 67.3mpg. On test we achieved 37.1mpg at 29mph – motorway cruising should be effortlessly in the high 40s.

Missing from the range is a successor to the E300 BlueTec Hybrid. Mercedes seems to be moving away from diesel hybrids in favour of plug-ins, and a petrol-electric E350e plug-in version will later in the year. This will offer around 20 miles of all-electric, emissions-free driving, making it London ULEZ-compliant.

The new E-Class looks smoother than its predecessor, with a look of S-Class about the exterior. Up front, the bolder AMG-style grille is standard, and despite utterances on the international launch last year that the traditional “gunsight” grille will return as an alternative, this hasn’t happened, to the annoyance of many chauffeurs. Come on Mercedes, sort this out. 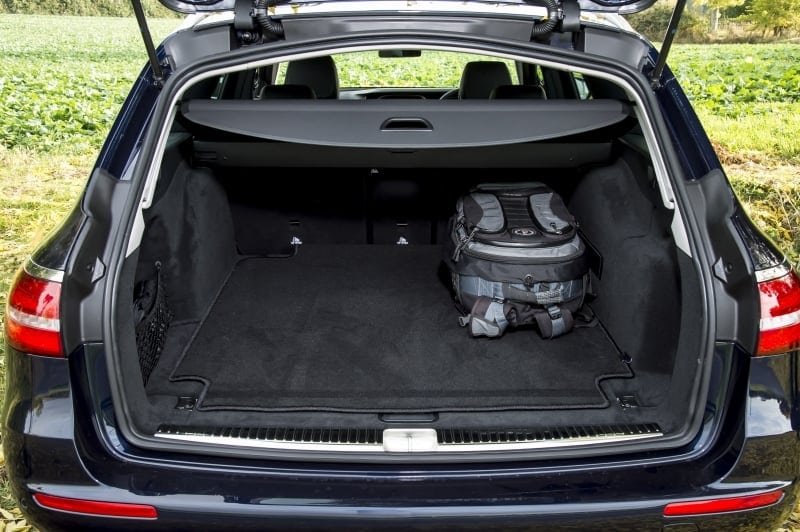 The estate has a typically Mercedes roof line – a gently descending slope at the rear. This is no “box on wheels”. But the load area is very acceptable at 540 litres below the load cover, with a wide, flat lip and a deep space – 1,175mm from tailgate to the seat backs. The rear load cover is attached to the electric tailgate and raises when the door is opened, giving easy access to bags at the back of the boot. There’s a handy, netted cubby hole on the nearside.

The estate roofline makes the back doors taller and helps with rear seat access – not that it’s a problem on the saloon. The latest E-Class is bigger than its predecessor. Its wheelbase has grown by 65mm (2,939mm against 2,874mm). This gives an extra 6mm of rear knee room – not a lot, but it certainly doesn’t feel cramped.

Inside, the E-Class has adopted the wide-screen, “floating” digital from the S-Class, complete with ambient lighting in an even greater choice of colours – 64, to be precise. 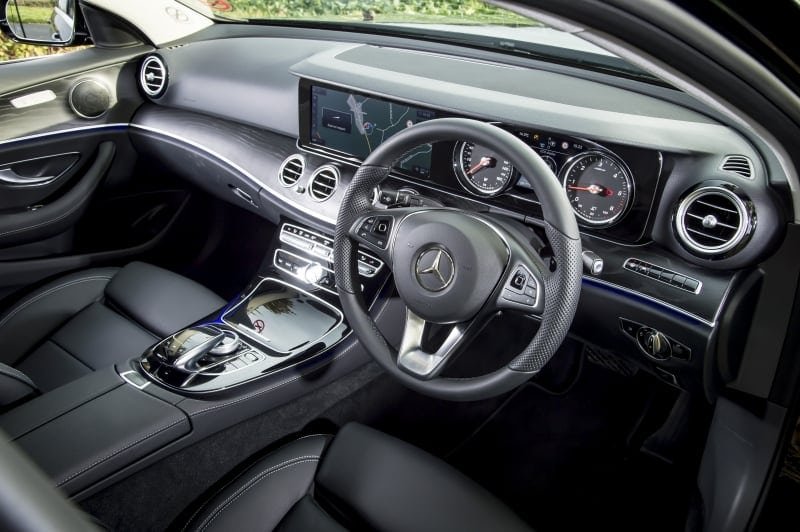 Our SE trim car does have a traditional instrument cluster with analogue gauges set on to a digital panel, with a fully digital satnav with extremely crisp graphics to the left. We’re not entirely sure why Mercedes has stuck with a traditional panel option. Surely it would make more sense to have a fully customisable display across all models?

The interior includes new sculpted front seats that are extremely comfortable, while a range of two-tone leather trim offers various browns and beiges as well as the functional black finish of our test car. 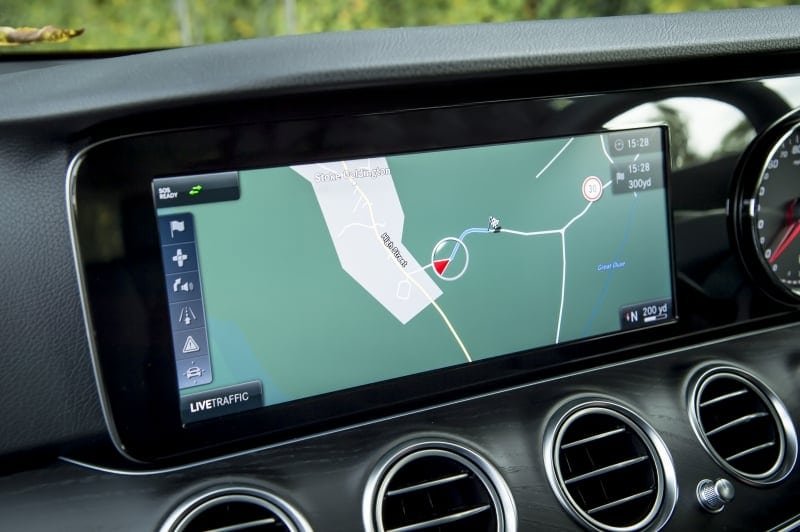 Satnav input can be via voice or the familiar Comand controller, which is now the same as that used in C-Class and V-Class, or via touch-sensitive pads on the steering wheel which allow the driver to control the system without taking hands off the steering wheel.

On the road, the four-cylinder diesel is extremely smooth and well-insulated. There’s very little noticeable engine noise, just a pleasant low-level roar as you pull away. Ride can be configured to Sport, Comfort or Eco – we stayed in Comfort for most of the time, to take advantage of the air suspension.

On the motorway, adaptive cruise control is now part of the Drive Pilot system. This has some neat tricks. Engage the cruise control by pulling the stalk toward you twice. This engages a speed limit recognition system that reads the road signs via a camera and immediately sets the cruise control to the maximum on the sign. It smoothly adjusts the speed according to conditions. If you’re still following slower cars when the limit increases, Distronic continues to track the car in front at a safe distance. 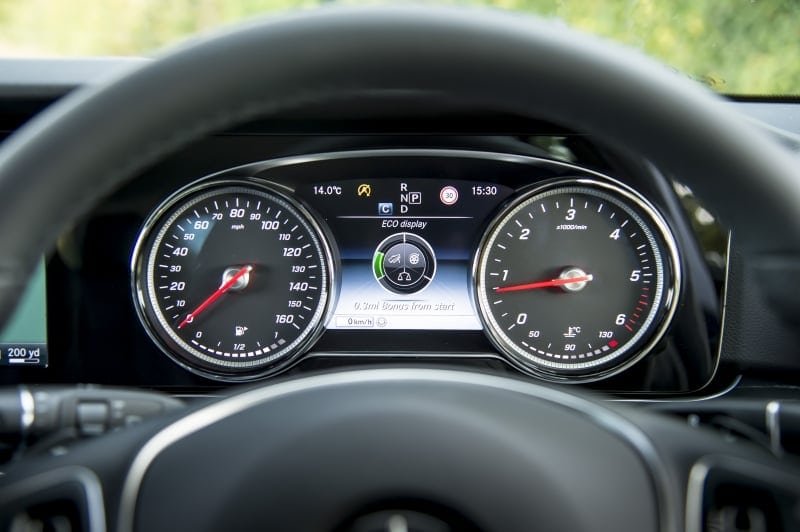 Drive Pilot also allows the car to follow lanes round corners without driver input. The car automatically steers, tracking the car in front, even if there are no lane markings. It’s not going to let you do this all the time – after a while, it disengages, so it’s best to keep your hands on or near the wheel. And it’s designed for motorways or straighter A-roads, not twisty lanes.

It’s especially useful in traffic jams, though, where at low speed the car will track cars round corners. And Distronic stays engaged for 30 seconds after you’ve reached a standstill, re-engaging the moment the car in front moves off. No need to re-engage, or boot the accelerator.

A new benchmark for the executive estate sector? Maybe. E-Class is up against the excellent new Volvo V90, and there will be new executive estates from Jaguar (XF Sportbrake) and BMW (520d Tourer) in the next few months.

But the new Mercedes-Benz E-Class has a real high-quality feel, with a “mini S-Class” interior and an improvement in rear seat comfort. And its safety systems are setting a new standard in vehicle autonomy.

As an estate, the E-class is well conceived. The loadspace is big and useable, and the car still looks very stylish. There is a slight improvement in rear headroom too. Competitors may be closing the gap, but as market leader in the executive chauffeur sector, Mercedes still has the upper hand.