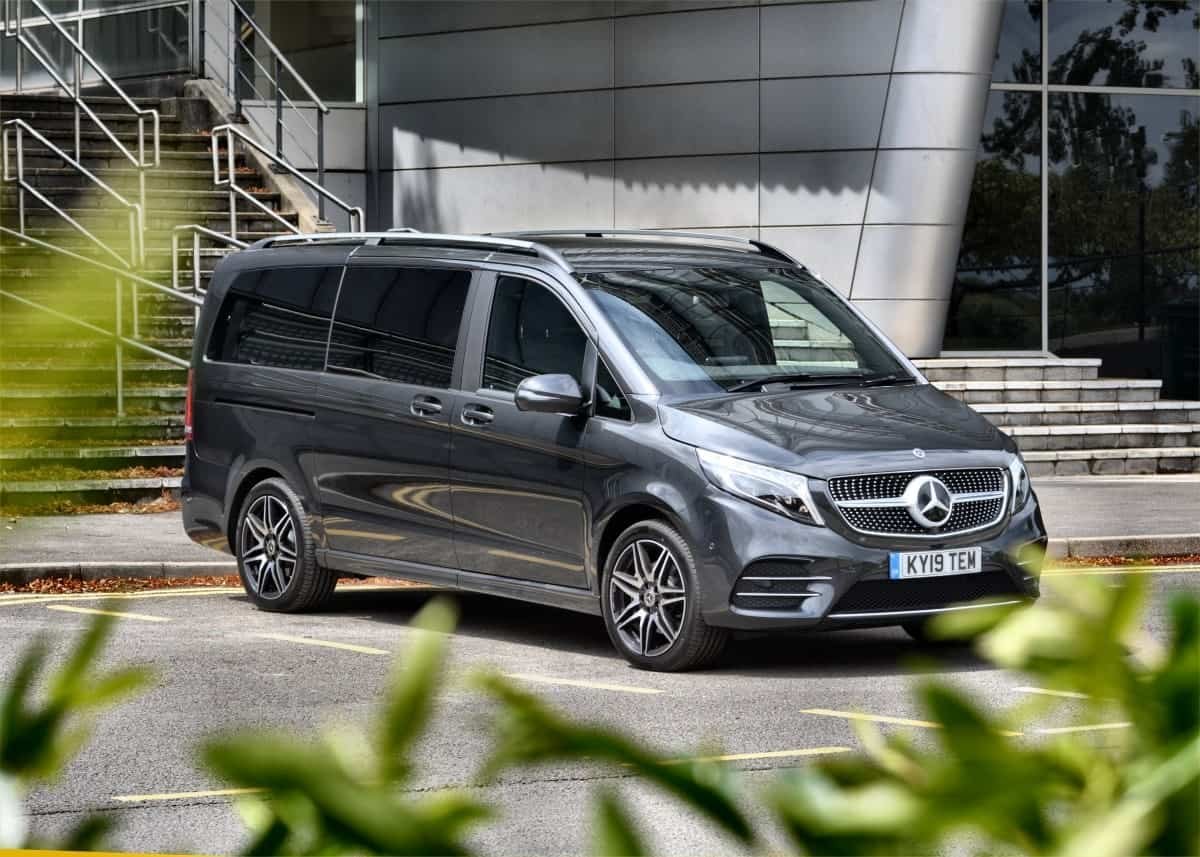 The Mercedes-Benz V-Class retains a unique position in the market – a large and luxurious MPV with a prestige brand that’s ideal for corporate shuttle and “mobile boardroom” jobs.

The V-Class is a more up-market vehicle than the car it replaced back in 2014, the Viano. And it has just received a significant mid-life facelift, with new powertrains and other upgrades. And later this year, an electric version, called EQV, will join the range.

As with the E-Class, the familiar old 2.1-litre four-cylinder diesel engines have been replaced by new 2.0-litre OM 654 diesels with reduced emissions and improved fuel consumption values, as well as better noise and vibration characteristics.

A 239hp version, with and 500Nm torque, becomes the top-line engine in the V300d model. In the acceleration phase, the V300d can briefly deliver 30 Nm of “overtorque” in addition to its 500 Nm of torque, aiding acceleration.

This engine also gives much-improved fuel economy, Mercedes claims – 44.9mpg-47.9mpg on the new WLTP test cycle. And for the first time in the V-Class, a nine-speed 9G-Tronic automatic transmission will be available in place of the previous 7-speed box.

A number of safety systems that will be familiar to S- and E-class owners are also added to the new V-Class. These include Active Brake Assist, which can avoid, or at least reduce the severity of a frontal collision. And high-beam assist makes it possible to drive with the main-beam headlamps permanently active.

Externally, the basic body remains the same. But the latest version of the V-Class has a redesigned bumper with new-look cooling air intakes and a diamond-pattern radiator grille, creating a vehicle with considerable presence. The Mercedes star is positioned centrally in the radiator grille and framed by two silver slats. The AMG Line will become visually more powerful with chrome pins in the grille.

New colours and materials are available inside and out. The dashboard is recognisable – it retains the flat-screen satnav and central ‘Comand’ controller. Circular vents have been redesigned. You even get a cut-down version of S-Class ambient LED lighting. A third trim level, Exclusive, fits between Sport and AMG Line, but is only available in E300d long-wheelbase guise. Two new paint colours are added: graphite grey metallic (on test here) and hyacinth red metallic.

The comfortable rear compartment is accessible through electric sliding doors. As before, the seating has reversible individual second-row leather seats. A three-person third row bench seat is standard, and a three-person second-row bench is a no-cost option.

V-Class comes in three lengths – standard, long and extra-long. We like the flexible tailgate that allows the rear window to open independently of the tailgate – helpful in tight spaces. The rear parcel shelf is load-bearing, and can carry small cases. Total boot capacity is a cavernous 1,030 litres – rising to a whopping 1,410 litres on the Extra Long body version.

It’s a refined vehicle, especially in the rear cabin. Noise levels have been cut even more thanks to the nine-speed automatic gearbox, which helps keep the revs low. The transmission is basically the same as that of the E-Class, with the gearing tweaked to give more low-end torque to cope with higher payloads.

It certainly responds well to being driven smoothly – heavy on the throttle and the engine growl makes itself known. There are four driving modes, switchable using a toggle switch on the centre console. These are Eco, Manual, Comfort and Sport. Eco promises optimised fuel economy, but at the expense of more sluggish throttle response, making for a heavy and uncomfortable drive. Sport is way too eager for this vehicle, leading to too many gear changes and harsh engine tone under acceleration.

As you might expect, Comfort is where it’s at – ride is soft and smooth, while the 9G-Tronic gearbox is optimised for slick upshifts as soon as the revs can handle the longer ratio. The V-Class is pretty nimble for a big vehicle, with a decent 11.8m turning circle, while ride is extremely solid, with minimal body roll in corners, even on the softest suspension settings.

Standard safety features include Crosswind Assist, derived from Mercedes trucks, which helps keep the V-Class on track in heavy crosswinds. A new Active Brake Assist system can now detect the risk of a collision with a vehicle driving in front and initially initiates a visual and acoustic warning. If the driver reacts, Active Brake Assist increases the brake pressure to suit the requirements of the situation. If the driver fails to react, the system initiates autonomous braking. In urban traffic the Active Brake Assist also reacts to stationary obstacles or pedestrians crossing.

Highbeam Assist Plus is also standard in the UK for the first time in the V-Class. In main-beam mode, Highbeam Assist Plus allows the driver to enjoy a permanent, broad illumination of the roadway without dazzling other road users. In the event of vehicles in front or oncoming traffic, the LEDs of the main-beam module are partially deactivated and thus create a U-shaped cut-out in the cone of light.

The V-Class has more competition than before – in particular, a new version of the VW Caravelle, while Vauxhall, Ford, Renault and Peugeot all have refreshed their seven-seater ranges in the past couple of years.

But it’s still the only luxury large MPV with a prestige badge, apart from its own less up-market stablemate, the Vito. And as a result, it has the luxury shuttle market more or less to itself.

The luxury upgrade from Viano to V-Class has only had minor tweaks, and it’s still a highly refined, extremely flexible people-carrier. Most of the upgrades are to the powertrain, with a much more efficient 2.0-litre diesel in place of the old 2.1, and two extra ratios in the gearbox, making a quieter and smoother drive.

We’d recommend you choose the longest body available – we tested the middle length of the three available, which offers more than 1,000 litres of luggage space. But the Extra-Long body takes that up to 1,400 litres – positively cavernous.

You’ll need to register a new V-Class this year if you’re in London – until the arrival of all-electric EQV versions in eth new year.