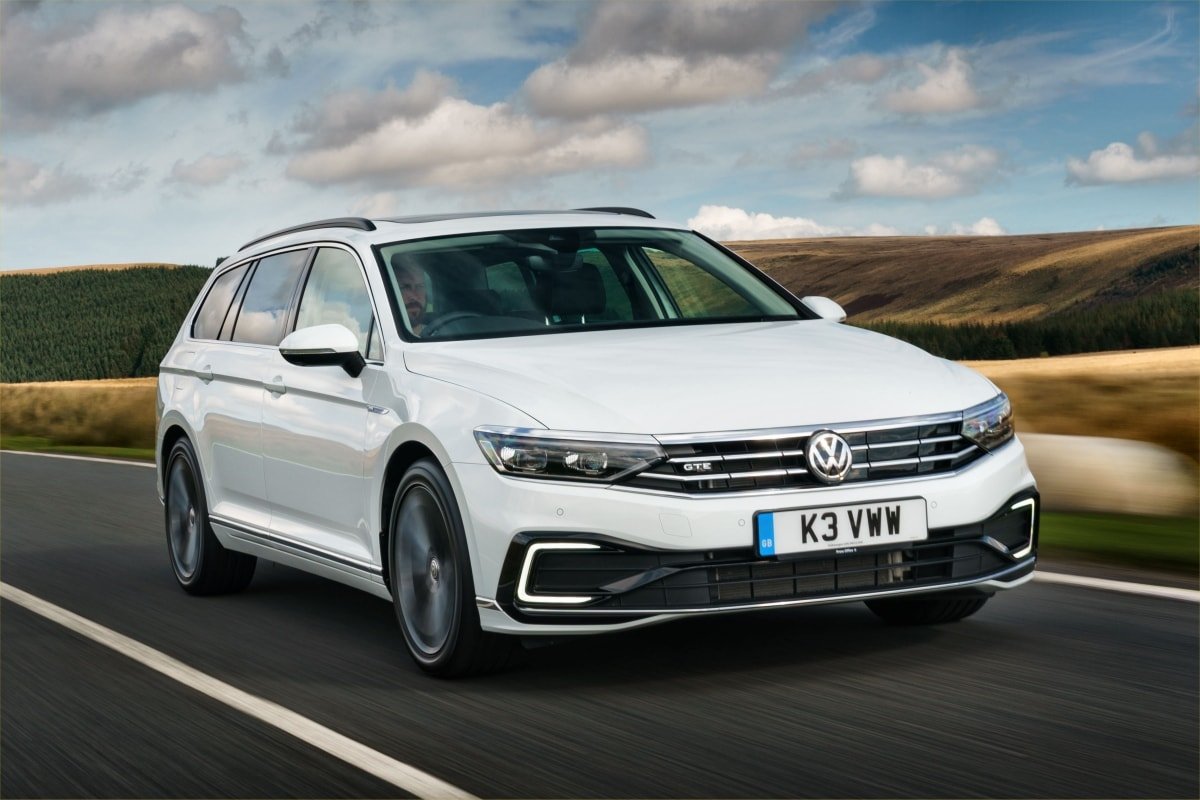 Volkswagen is entering its “third age”, the company has rather grandly announced. The launch of its first all-electric ID model, the ID3, is seen as the symbol of a new approach, and as vital to the company’s history as the original Beetle and the 1973 VW Golf.

There’s even a new look to the VW logo. But while the revolution is taking shape, Volkswagen has a job of selling cars to do. And its latest offering is a car that’s very much part of VW’s second age – the Passat.

Indeed, the Passat brand has been around for longer than Golf. Now in its eighth generation, the latest versions represent a significant facelift. In particular, VW has improved the plug-in hybrid GTE versions, and has increased the supply of the petrol-electric PHEVs – good news for London private hire operators in need of a zero-emissions capable new car.

Indeed, going forward GTE models will account for one in four Passat sales – with the previous GTE, only one in 10 Passats were PHEVs. On the latest version, the pure electric range has been increased to 34 miles on the WLTP scale. Translated to the old NEDC cycle, the increased range becomes apparent: 43 miles (NEDC) against 31 miles (NEDC) on the old GTE.

The classic shapes – both saloon and estate – of the Passat remains the same, but design tweaks include revised front and rear bumpers and radiator grille. The Passat name is now located centrally at the rear, as it is on the Arteon. New LED headlights and tail-light clusters are added, while there are a number of new, brighter metallic colours including blue, green and gold.

Inside there are new trim finishes and fabrics, redesigned door trims, new instruments and a new multi-function steering wheel as standard. A Passat logo in the dash panel replaces an analogue clock. The centre console has a large, open storage compartment with an optional inductive interface for smartphones and USB-C connection. There is ambient lighting n a choice of 30 colours and a new all-digital dash panel as an option.

The powertrain retains the 1.4 TSI petrol engine and electric motor, driving the front wheels. via an automatic six-speed dual-clutch gearbox that has been developed especially for use in hybrid vehicles.

The increase in pure electric range is down to an improved 13kWh storage battery capacity. The petrol engine delivers 156PS and, when working in tandem with the electric motor, there is a combined total output of 218PS and 400 Nm of torque. The emphasis is as much on performance as economy – hence the GTE name – and both the Passat GTE saloon and Estate can achieve top speeds of 138 mph, while 0-62 mph time is 7.4sec for the saloon and 7.6sec for the estate.

Even under the new WLTP system, the quoted fuel economy is pretty meaningless – the brevity of the tests gives the Passat GTE a fuel consumption figure of 180.8 to 217.9 mpg depending on specification and body style. This is actually less plausible than the fuel consumption of the GTE calculated under the old NEDC system, which ranges from 166.2 to 188.3 mpg. This also gives implausible CO2 emissions figures range from 34-39g/km (NEDC) and 29-25g/km (WLTP).

To achieve such figures, you would have to keep the GTE in an almost constant state of charge – fine if you’re a private user with a 15-mile commute and a home charger. But for a private hire operator, you’ll be driving most of the time on the internal combustion engine.

On test, we drove the car for 98 miles, starting with a full charge and running on the petrol engine once the battery became depleted. There is a certain amount of regenerative energy generated under deceleration or braking, so you get some electric drive even when the storage battery is out of juice. We returned a fuel economy figure of 50.4mpg, achieved on mixed motoring at an average speed of 33mph.

This compares well with a 190PS Passat 2.0TDI that we also tested, which returned 52.4mpg at 31mph over 131 miles. So the fuel component of the GTE’s running costs are likely to be lower than those of the diesel, largely due to the cheaper pump price of petrol. The more frequently you charge the car the better, clearly. And a home charge overnight would be the most economical way to do that – providing you have off-road parking and access to at the very least a 12v socket.

The Passat GTE is designed to complete short distances in urban areas purely on electric power. That is why it always starts in E-mode when the battery is sufficiently charged and thus becomes a zero-emission vehicle in urban conditions.

The new high-voltage battery is located in the vehicle floor in front of the rear axle, so it does not take up boot space – a major plus point for those wanting to use the car as a taxi. There is a storage area under the boot floor to stash the charge cable.

Energy content of the battery has been upped 31 % from 9.9kWh to 13.0kWh. And it is now possible to store the battery power, even during long journeys, and then switch to electric mode upon reaching an urban destination area by using the E-Mode button, which can be activated at any speed up to 87mph.

The Passat GTE is almost silent in E-Mode, so it is fitted with an electronic engine sound in order to alert pedestrians, which is activated automatically when the ignition is switched on.

The electric motor can provide fully electric driving, or it can act like an additional booster to the petrol engine, giving faster acceleration. Volkswagen has reconfigured the operating modes of the hybrid system. Instead of the previous five operating modes, there are now only three: E-Mode (purely electric driving); GTE (sporty driving with full system power) and Hybrid (automatic switchover between electric motor and TSI engine). GTE mode alters the vehicle’s chassis to make it tauter when used in conjunction with the optional adaptive chassis control.

The two previous modes: Battery Hold (maintaining battery charge level) and Battery Charge (charge battery via TSI) have now been integrated into Hybrid mode. To charge the battery while driving, the driver needs to activate the drive mode selection menu either via the E-Mode button (next to the gear knob) or via the Infotainment system.

The system is very sophisticated, and does offer the option of “topping up” the battery via the petrol engine while driving. If the Hybrid field is pressed, a battery scaled in ten stages (0 to 100 %) appears, indicating the current state of charge. The driver can intuitively identify the state of charge by the corresponding number of battery segments lit up in light blue; if the state of charge is 40%, four segments light up.

Next to the battery is a symbol with two stylised gears. If the driver taps on this symbol, the battery’s current state of charge is then maintained for the time being. The driver now has the option of maintaining the state of charge or increasing it in 20% increments or lowering it to a defined level. If the driver selects to increases it to 80 %, the battery is charged via the TSI engine and brake energy is recuperated according to the set level on the scale.

If the driver selects only two segments, the electric energy can be used up to the set minimum of 20 %. Whenever route guidance is active the battery manager also takes into account route data to ensure that there is sufficient battery energy content available at the destination.

The Passat GTE’s battery can be charged externally via a plug in the front grille. If the battery were completely empty, charging would be completed in around five hours when connected to the 230 volt grid via a standard charging cable for a 2.3 kW alternating current. The charging time falls to roughly three and a half hours with a wall box or a charging station with 360 volts and the optional charging cable for 3.6 kW alternating current. The battery charger integrated in the car manages charging fully automatically.

Plug-in hybrids might not offer the long-term solution for private hire, but the Volkswagen Passat GTE is one of the best we’ve seen. We like the fact that the battery pack doesn’t take up boot space – a major obstacle with many PHEVs.

So even the saloon version has plenty of boot space, while the estate is cavernous. It’s roomy and comfortable in the cabin too – the estate has better rear headroom and easier access via its bigger doors.

The hybrid system is extremely clever. We achieved decent fuel economy just driving in normal Hybrid mode, but the system allows the driver to use some of the engine power to recharge the battery on the go – rather like a range-extender. So if you had to drive into a restricted city, having already used up your electric mileage, you can turn up the regeneration and effectively recharge your battery, so you can switch back to EV mode again once you reach a congestion zone.