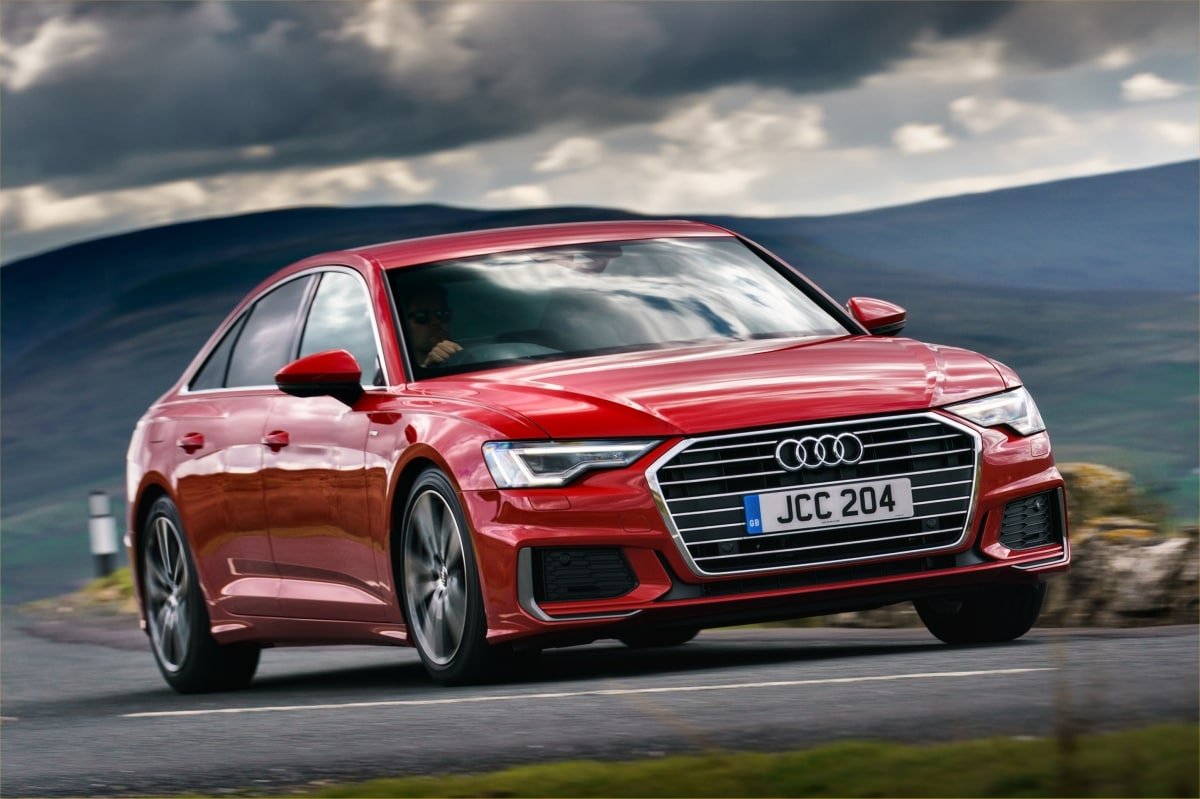 Audi’s latest A6 was launched toward the end of 2018 launch, and is aimed as a serious challenger to the executive chauffeur sector’s benchmark car, the Mercedes-Benz E-Class. It’s bigger, roomier and cleaner, and comes packed with the full suite of impressive safety and communications technology that has so impressed us on A8 and Q8.

The redesigned body looks more purposeful and aggressive, thanks to the now-familiar wide-mouthed angular Audi grille. Sharper creases in the panel lines and distinctly flared wheel arches give a lower, longer-looking side profile.

The low, wide look is further highlighted by the strips of LED lighting at the front and right across the rear of the car. As on the A8 and A7, these are animated on start-up and shut-down.

The A6 shares its platform and much of its interior with the A7 Sportback, and both cars adopt much of the new technology seen in the larger A8, including the latest MMI touch infotainment system, and new mild-hybrid technology on all engines in the range.

This uses a belt alternator starter and a lithium-ion battery, enabling the A6 to coast at speeds of between 34mph and 99mph and to initiate its start-stop function at speeds of 13mph and below.

For the first time, we are getting to experience Audi’s latest 2.0-litre diesel engine – which is represented by ‘40’ in Audi’s still-hard-to-understand new model naming system – the numbers are bands, relating to power output regardless of engine type: at 204PS, the 2.0-litre four-pot diesel falls into the ‘40’ band; 286PS 3.0-litre turbodiesels are also available at launch; these are known as ‘50’ models. Four-cylinder petrol and diesels will account for 70% of sales.

The A6 has always been highly competitive in 2.0-litre trim; we especially liked the fuel-economy focused Ultra model available with the old-shape A6, and winner of Professional Driver’s Executive Car of the Year award in both 2014 and 2015.

The A6 40 S Line on test here is as close as is offered to the Ultra spec. It’s a non-Quattro front-drive model, with 7-speed S-tronic auto transmission as standard. There is no manual option in the A6 range, though you will be able to specify optional Quattro four-wheel drive soon after the launch.

Audi claims a combined fuel economy of 62.8mpg for the model on test, under the new WLTP method too, which should make the result closer to reality. On our test, we achieved 46.5mpg on a route rather lacking in motorways – hence a below-typical average speed of 25mph. A result into the 50s should be easily achievable, and we’ll certainly be looking to put this model through a more extensive test in the coming weeks.

The interior of the new Audi A6 is even larger than in the outgoing model. Overall, the interior is 21mm longer; legroom in the rear exceeds not only its predecessor but also its main competitors, while headroom (plus 11mm) and shoulder room (plus 7mm) are also more generous than previously. Both saloon and Avant estate bodies are available, and the estate’s rear seat headroom is greater than the old A6 Avant by 14mm.

Boot capacity remains the same as before at 530 litres, though the load bay is longer by 18mm. The Avant offers 35 litres more boot capacity than the saloon at 565 litres.

Compared to the 3.0 ’50’ models, the A6 40 is a lot more mechanically conventional. The 3.0 TDI unit is paired with an eight-speed Tiptronic auto transmission and Quattro all-wheel drive as standard, as well as adaptive air suspension with controlled damping. The front-drive 40 has to make do with conventional springs, and while it’s not quite so smooth and competent over bumps as the air suspension, it’s still very competent, especially with smaller 18in wheels.

The lower-powered engine is geared for cruising, and the abundance of mid-range torque makes for easy overtaking, or coping with hills.

The interior is basically the same as the A7 we tested earlier in the year. The A6 uses a number of digital panels to control many of the functions. The driver controls the infotainment via an upper 8.8in display (or 10.1in where the optional MMI navigation plus upgrade has been specified). The lower 8.6in display, located in the console in the centre tunnel, is used for the climate control and for the convenience functions and text input. A 12.3in LCD digital dashboard screen replaces conventional dashboard dials, and a full colour head-up display is an essential option.

Audi has simplified the options structure for its range – not before time – and a number of option packs are now available. A Comfort and Sound Pack (£1,895) includes Bang & Olufsen premium sound system, extended LED interior lighting and electric hands-free boot. This is not an essential purchase – you’re better off with the £1,495 Technology Pack with the enhanced MMI Navigation Plus system; or the Tour Pack (£1,950), which brings Adaptive Cruise Assist including camera-based traffic sign recognition.

Such is the quality on offer in the executive sector these days that surely any perceived quality gap between Mercedes-Benz and its key rivals is now just residual brand snobbery.

Certainly there is no gap that we can see between the new A6 and its key German rivals, the Mercedes-Benz E-Class and the BMW5-series. But the three cars are different – and now the executive offerings mirror the same brands’ offerings in the chauffeur sector too. The 5-series remains the most driver-focused of the three; the E-Class the most stately.

The A6 comes somewhere in between. The 2.0-litre versions lack the performance sparkle of the bigger six-cylinder A6 50 models, but that’s not the game we’re in. And if you’re going to be spending many hours behind the wheel, you want something that drives with a degree of effortlessness. And that’s what the A6 offers.

On top of that, the fuel economy return on the A6 40 looks very good, and should restore the A6 as the economy leader in the sector for running costs.

Where the A6 really scores is on practicality. It feels like the biggest of the three Germans inside – only the excellent Volvo S90 feels as roomy in the rear. Boot size is a close match between all the rivals. The curve ball in the sector is BMW’s 6-series Gran Turismo, which outscores them all for interior space, though its greater bulk and hatchback body might not be to all tastes.