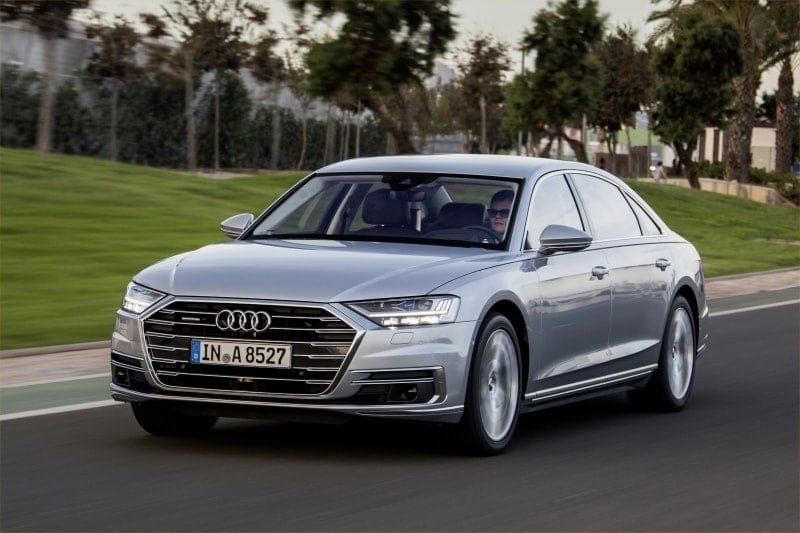 The 2010 Audi A8 has been a fine car, but it’s starting to show its age. That pop-up satnav screen was impressive on launch, but now its 4:3 format looks small and outdated compared to the vast digital panels of the Mercedes-Benz S-Class. And while it’s still a comfortable car, it lacks the immersive opulence of the S-Class, or the tight, connected handling of the BMW 7-series.

Both these cars have raised the bar in the chauffeur sector since Audi last presented a new flagship, but now is the time to see if Audi’s all-new A8 really does put it back in the game.

Audi’s new model is the fourth-generation A8 since the luxury line made its debut back in 1994. Then, it boasted a radical all-aluminium spaceframe construction – the idea was a lighter, more frugal car than the bulky 1990s S-Class. As a result, the A8 has always been seen as something of an outlier – even though it has changed an awful lot in the intervening two decades. 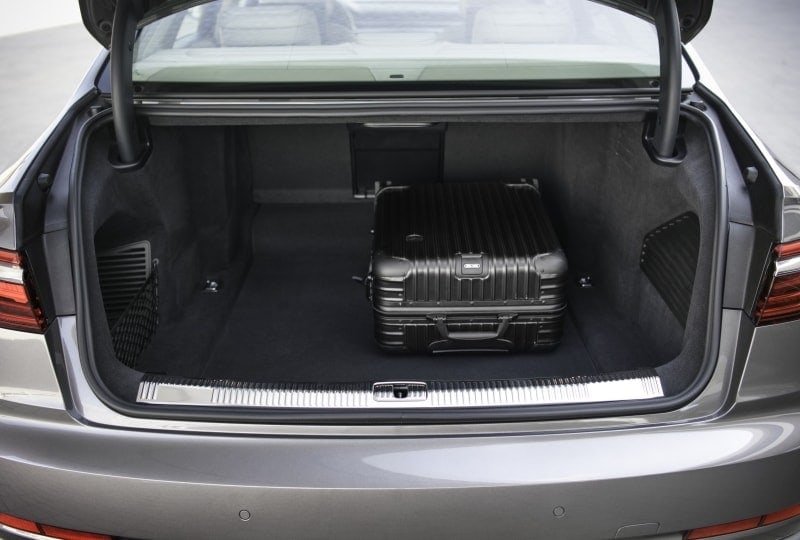 The new A8 has grown substantially in length in both body styles, even compared to the 2010 version, though oddly, luggage space is actually smaller than the old car – 505 litres against 520 litres.

Perhaps most significantly, there is 32mm more legroom than the old LWB version, and top-line versions of the A8L now match the S-Class and 7-Series by making the nearside rear seat an optional relaxation seat that comes with four different adjustment options and a footrest, including a foot massage function. 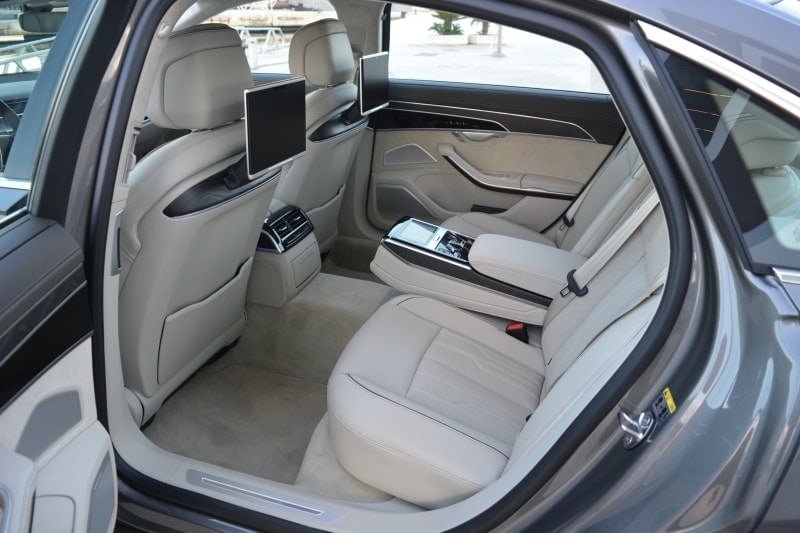 The A8 is still mainly built of aluminium – but the bodyshell is a lot more conventional these days. And the needs of crash protection mean there are some steel and magnesium parts in there too these days. And the shell has to accommodate hybrid powertrains – a ULEZ-compliant plug-in is due next year. This will be a petrol-electric plug-in hybrid with a 30-mile pure electric range.

Meanwhile, regular petrol and diesel versions will go on sale before the end of the year. The launch range comprises standard-wheelbase A8 and long-wheelbase A8L models, which feature a 130mm stretch. Both are available with 3.0-litre diesel and petrol engines, as well as a 4.2-litre V8 diesel and a range-topping 6.0-litre W12 petrol model.

All include a high degree of autonomous driving capability, and every model in the range will have at least a mild hybrid powertrain. This is made possible as all combustion-engined models use a 48-volt electrical system.

The mild hybrid (MHEV) drive comprises two main components: a water-cooled 48-volt belt alternator starter and a lithium-ion battery in the luggage compartment to act as the energy accumulator

The new A8 MHEV can switch into battery-driven coasting mode from 34mph to 99mph, and can then coast with zero emissions for up to 40 seconds with the engine off. 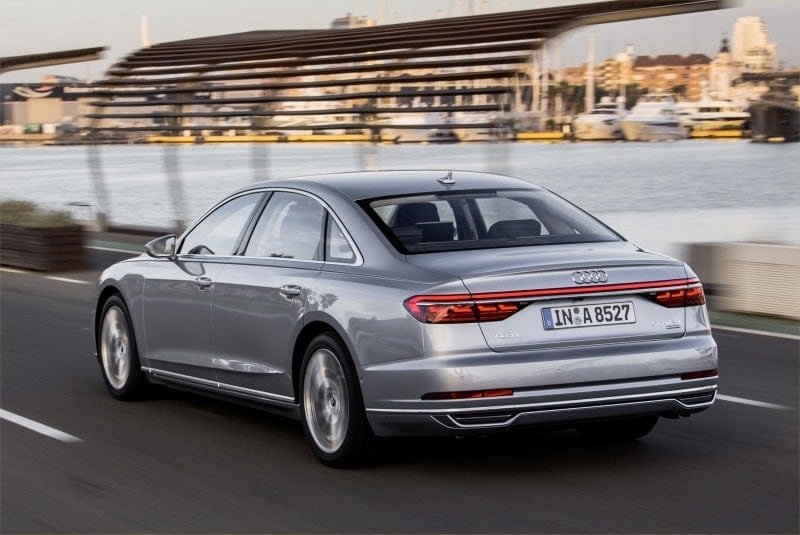 The plug-in hybrid A8L e-tron quattro will follow toward the end of 2018. This combines a 3.0 TFSI petrol engine and an electric motor to give 449PS of system power and 700Nm of system torque. The lithium ion battery stores enough power for about 31 miles of electric driving, but as with most large PHEVs, the battery pack is in the boot and reduced boot space from 560 litres on standard diesel or petrol models to 390 litres.

However, Audi has rather cleverly addressed the other main problem of plug-ins – fuel tank size. The BMW 740Le, for example, only has a 46 litre tank, so range is restricted to around 300 miles – meaning frequent fuel stops. The A8L e-tron Quattro has a cleverly moulded 64-litre tank mounted under and behind the rear passenger seat – so it should gave a more realistic fossil fuel range.

Wireless Charging will be offered at a later date as an option on the PHEV model. This uses a pad in the garage floor to transfer power inductively to a receiver coil in the car.

The new A8 has an impressive arsenal of “piloted driving” functions, will also be rolled out in production Audi A8 versions from 2018. As with many quasi-autonomous cars, the systems are ahead of the legislation – so while the A8 will comfortably track lanes on motorways, you’ll have to keep your hands on the wheel, as the system won’t stay locked in. 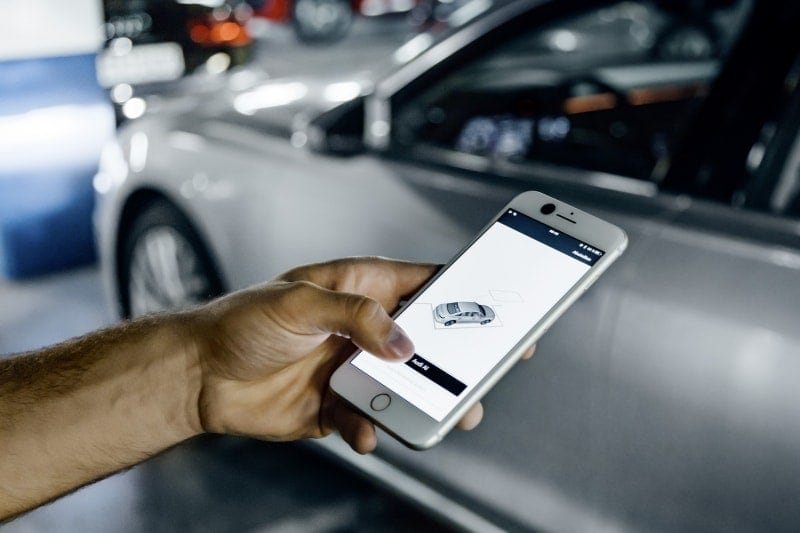 You’ll get an autonomous parking function, straight away – the car will parallel park or move into a tight bay on its own – and even with the driver outside the car, using a smartphone to control the movements. Parking in a tight garage without bashing the doors on exit will be possible from outside the car

And from 2018 it will be possible to drive semi-autonomously in slow traffic. A “traffic jam pilot” will work at up to 37mph on major roads where a physical barrier separates the two carriageways. The system is activated using an AI button on the centre console. The traffic jam pilot manages starting, accelerating, steering and braking – going with the flow, basically. As soon as the system reaches its limits, it calls on the driver to take control.

Climb on board and it’s clear that much has changed in the world of car infotainment since 2010. The pop-up screen is gone, and the dashboard is almost completely digital, with three separate panels. A central 10.1in satnav screen is flush-mounted with the dashboard, and when the system is off, the screen disappears completely. 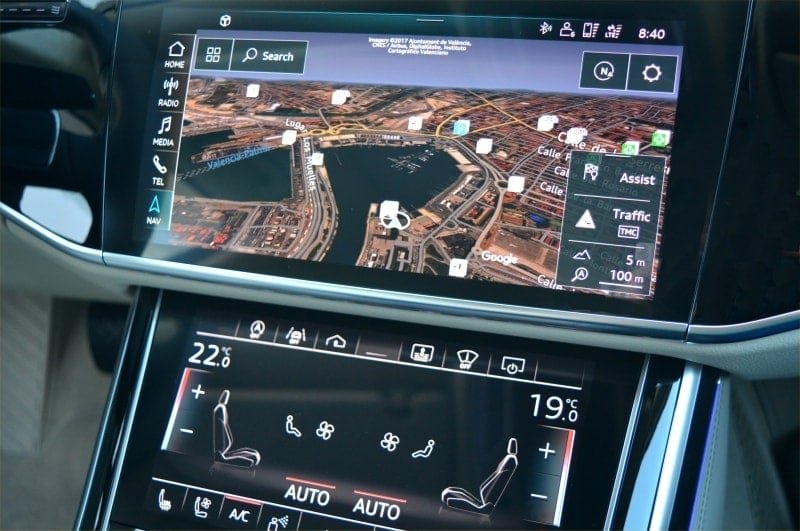 The satnav map incorporates highly detailed 3D models of major European cities. Information on destinations and media is either available on board or is delivered from the cloud at ultra-fast speed.

Navigation and maps can also be displayed on the digital dash panel. A third touch screen serves as heater control and input device, allowing handwriting input of a more sophisticated nature, including whole words to be written with a finger tip – no need to wait for the system to recognise each letter. It also has a form of predictive text, offering suggestions in case your writing isn’t up to scratch.

And of course, like all handwriting systems on RHD cars, the driver has to use the left hand – which for most people is the wrong hand. And unlike the Mercedes and BMW rivals, there is no physical input device – it’s writing or voice only. However, the system does work – we particularly like the feedback from the screen – you feel a noticeable “click” through your fingertip as you push a button on the screen. It makes the whole thing a lot more stable, especially if you’re trying to input data, or change the radio station or air-con on the move. 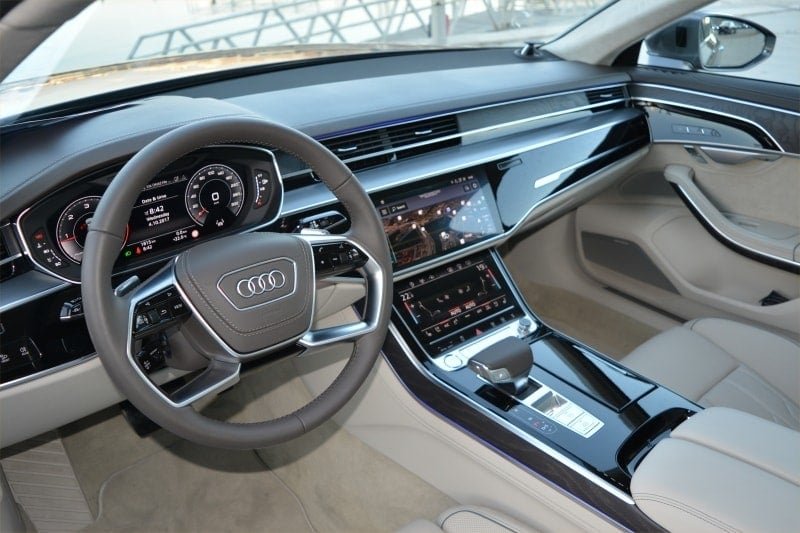 The only downside to the new system is the position of the screens, which are rather low on the dashboard, below the central air vents. The main screen is not in the driver’s eye line, though the map can be replicated on the main dashboard panel, and there is also a very clear full colour head-up display for navigation instructions, speed limits and so on.

On the road, the new A8 immediately feels significantly bigger and more impressive than the old model. Maybe it’s the twinkling screens and ambient lighting that give an air of importance on the car – but it certainly feels a lot more up-market and genuinely impressive. 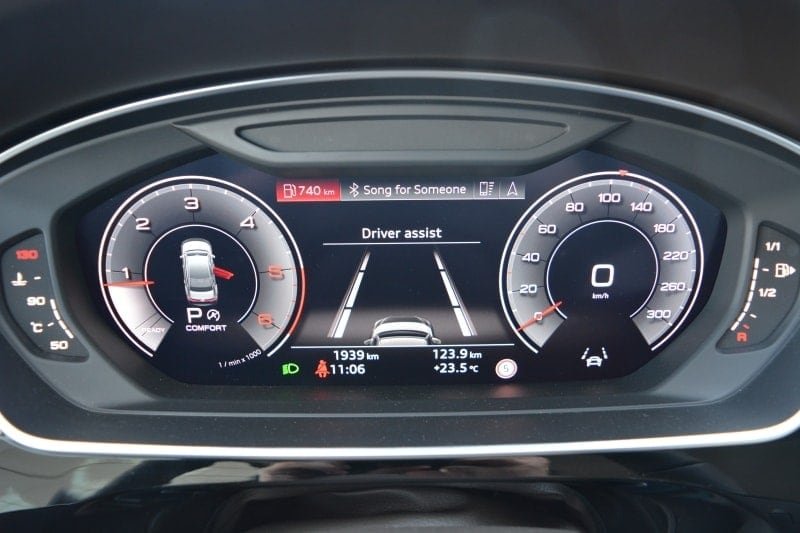 Driving dynamics are improved by the addition of dynamic all-wheel steering, which turns the rear wheels either in or against the direction of steering depending on the speed range. The A8 has always fallen somewhere between the intense driveability of the 7-series and the calm, unhurried smoothness of the S-Class.

And that’s still the case – though the A8 has probably shifted a little toward the S-Class. No bad thing, given the Mercedes’ dominance in the chauffeur sector.

An impressive option is predictive active suspension, which is capable of raising or lowering each wheel separately using electric actuators depending on the driver’s wishes and the driving situation. This enables the A8 to balance the ride comfort of a luxury saloon and the agility of a driver-oriented performance car. 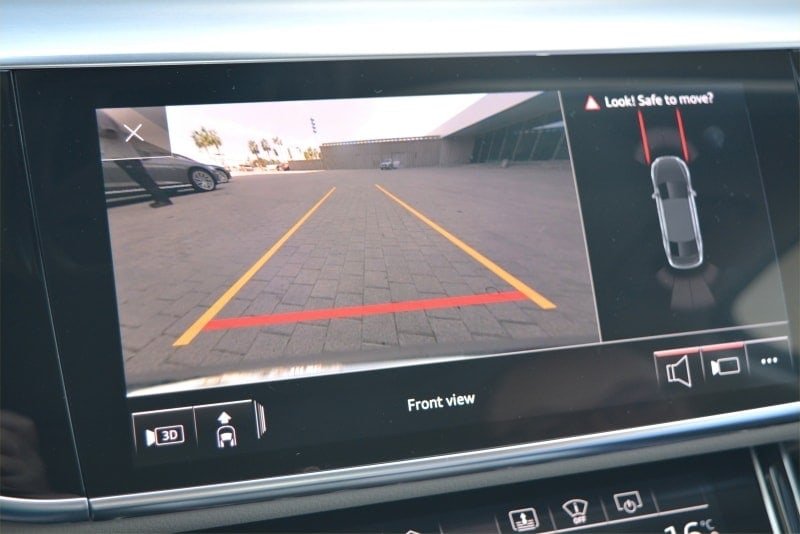 The system is also part of the suite of safety aids fitted to the car – if the car senses that it is about to be hit in the side, it raises the suspension rapidly, so the car impacts the lowest and strongest part of the body where the sill and B-pillar meet. Another benefit of the extra power stemming from the 48-volt system.

We took the car on a varied route of around 80 miles, including urban miles, motorways and twisty mountain roads. We averaged 30mph, and returned real-world fuel economy of 35.7mpg – a decent return, but some way short of the claimed combined figure of 50.4mpg for this specification level.

It’s a better return than the revised S-Class we drove earlier this year, and better than the figure e achieved last time we tested the Jaguar XJ a couple of years ago. The BMW 7-series was a little more frugal, though at a higher average speed. We reckon there won’t be a lot of difference in fuel economy terms, and your buying decision probably won’t be dictated by your wallet.

Audi has never before made a car so loaded with technology as this new A8, and it’s going to give the manufacturer its most serious weapon against the dominant Mercedes S-Class in the chauffeur sector.

There’s nothing that the S-Class can do that the A8 can’t – and that’s a significant closing of the gap between the two cars. Importantly, the new A8 feels impressive from the moment you climb on board. The digital dashboard really looks the part, and is every bit as impressive as Mercedes’ digital “floating panels” – while resolutely retaining its own style.

And it does rather make the BMW 7-series’ rather modest satnav screen look a little old-fashioned – though it’s hard to fault the functionality of the 7-series’ system.

OK, you’ll have to get used to left-hand fingertip data entry on the A8 – though the system makes life easy for you by recognising even my scruffy handwriting, and allowing you to write letters over each other without needing to pause for each letter to be accepted. You can enter place names very quickly indeed, with a bit of practice.

The A8 has a genuine “big car” feel, with an impressively opulent rear seat, especially with the optional full luxury nearside seat. The driving position feels lower and more enclosed than before, and high-quality displays, including a HUD, are genuinely nice to read.

And the range is rather well future-proofed, with both plug-in hybrids and autonomous driving features hard-wired into the range. If the chauffeur market can get round its attachment to the three-pointed star, the four rings could make major gains.

TwitterFacebookLinkedInEmail
Posted in Road Tests
← Leeds Clean Air Zone could mean daily £12.50 charge for taxi driversAlmost one in three cab rides could be autonomous by 2025, says Addison Lee boss →
We use cookies for various purposes including analytics. By continuing to use the service, you agree to our use of cookies. - Cookie Policy