It’s undoubtedly the benchmark car for executive chauffeur work, but the Mercedes-Benz E-Class has recently found itself under threat.

The economical Audi A6 Ultra and the much-improved Jaguar XF have been pinching sales in the past few months. And with the exciting Volvo S90 on the way too, a model refresh couldn’t come too soon for the Mercedes E.

And as refreshes go, this one is pretty spectacular. The tenth-generation Mercedes in the executive size bracket – a line stretching back to the 1950s ‘Ponton’ model – this latest E-Class is all new, and brings significant improvements in performance and luxury.

But overshadowing the S-Class-style interior and frugal new 2.0-litre diesels is the inclusion of some immensely impressive technology that takes the S-Class as close as any car on the market to the world of autonomous driving. Take that, Google.

Initial supplies, available from May, will be of E220d and E350d models, in SE and AMG trim levels. The E220d has Mercedes’ new 194bhp four-cylinder 2.0-litre turbodiesel, replacing the familiar 2.1-litre engine from previous E-Classes. It’s more compact than the previous unit, and all UK E-Classes will come with 9G-Tronic transmission – that’s a nine-speed box, replacing the seven-speed of the old E.

There’s no E250d, and while there will be a lower-powered E200d, it won’t come to the UK. Only saloons will be available at first – estate versions won’t be here until next year. Meanwhile the old wagon will soldier on for the rest of 2016.

A Plug-In Hybrid E350e version will follow. This will offer around 20 miles of all-electric, emissions-free driving. It combines a four-cylinder petrol engine with an electric motor fitted between engine and gearbox, giving a total system output of 286bhp with a system torque of 550 Nm.

The E-Class looks smoother than its predecessor – the process of cleaning up the car’s lines that started with the previous facelift has continued. So now there’s a look of S-Class about the exterior, though without the downward sweep of the panel lines on the doors. The grille is even bolder – and many chauffeurs will welcome the news that the traditional “gunsight” grille will return as an optional alternative to the AMG-style front face.

The car is bigger, too. Compared with its predecessor, its wheelbase has grown by 65mm (2,939mm compared to 2,874mm), and overall length is 43mm greater (4,923mm plays 4,880mm). This gives an extra 6mm of knee room in the rear – not a lot, but it certainly doesn’t feel cramped. Tall, wide rear doors make for easy access. Boot space is the same at 540 litres. 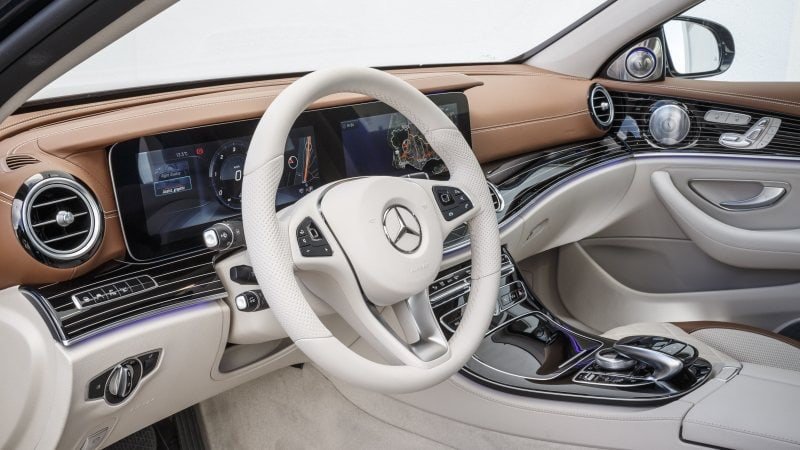 Inside, the E-Class has adopted the wide-screen, “floating” digital double-panel from the S-Class, complete with ambient lighting in an even greater choice of colours – 64, to be precise. Satnav graphics are extremely crisp – the central 12.3in screen covers the mapping while driving information is on the same-sized customisable screen in front of the driver. 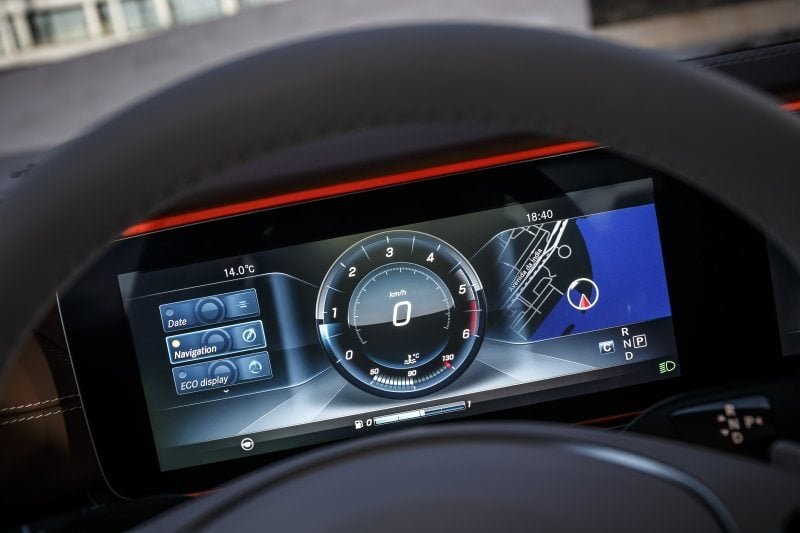 This digital display doesn’t just mimic an analogue dash – you can configure a more modern “progressive” layout, with digital speed display surrounded by a circular rev counter, with satnav instructions to one side and driving data to the other. Finally, the satnav voice commands have eliminated the plaintive” please” before each command, replacing it with a stern “now”. Much better!

The interior includes new sculpted front seats that are extremely comfortable, while a range of two-tone leather trim options major on browns and beiges as well as functional black. Our test car had a chocolate and cream interior, compete with very business-like pin-striped wood inlays. Very smart. A panoramic glass roof creates a light, airy cabin too. 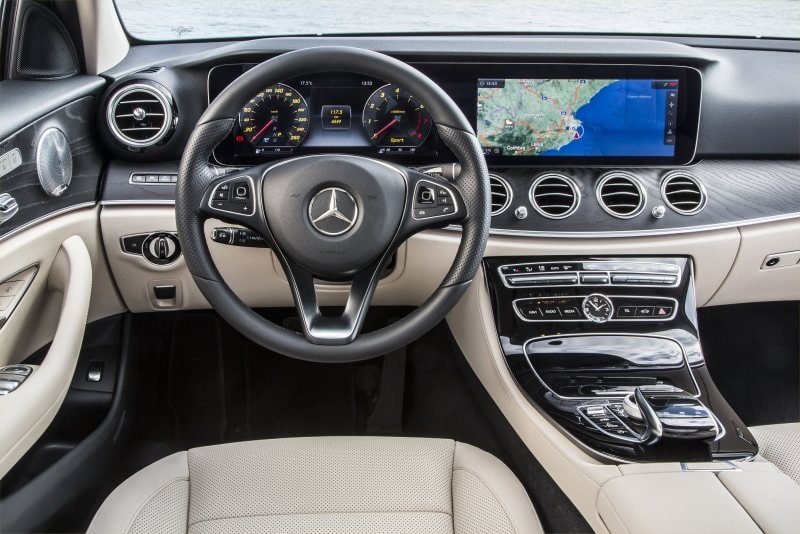 Satnav input can be via voice or the familiar Comand controller, which is now the same as that used in C-Class and V-Class, with touch pad on the top to allow smartphone-style pinch and squeeze gestures and handwriting input. 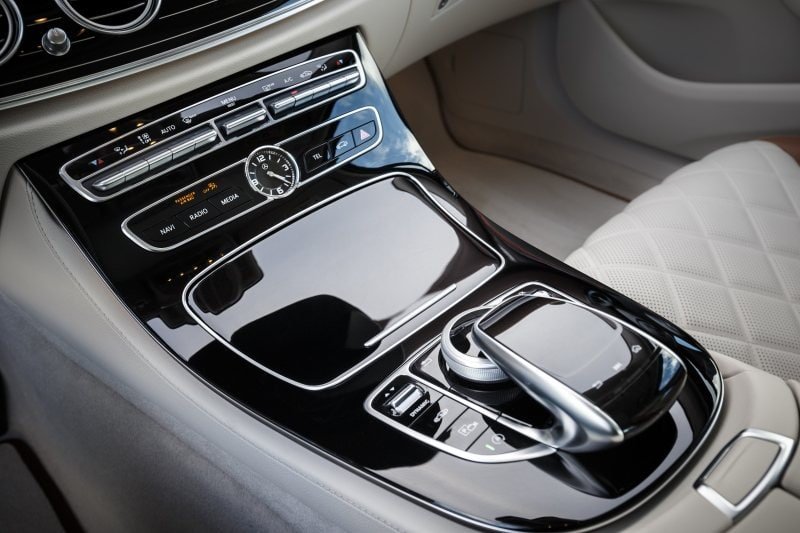 On the road, the four-cylinder diesel is extremely smooth and well-insulated. There’s very little noticeable engine noise, just a pleasant low-level roar as you pull away. Ride can be configured to Sport, Comfort or Eco – we stayed in Comfort for most of the time, to take advantage of the air suspension.

On the motorway, we had a chance to try out some of the really clever safety features of the new E-Class. Adaptive cruise control is now part of a suite of systems called Drive Pilot, and this is the system that gives the E-Class its autonomous capabilities. It’s a £1,695 extra, but well worth having.

So what can it do? Engage the cruise control by pulling the stalk toward you twice and the system is on. This engages a speed limit recognition system that reads the road signs via a camera and immediately sets the cruise control to the maximum specified on the sign. It’s very quick – less than a second – and smoothly decelerates and accelerates according to conditions. Of course, if you’re still following slower cars when the limit increases, Distronic works as it always does and tracks the car in front at a safe distance.

The most significant new feature is an ability to follow lanes round corners without driver input. The car automatically steers, tracking the car in front, even if there are no lane markings. It’s not going to let you do this all the time – after a while, it disengages, so it’s best to keep your hands on or near the wheel. And it’s designed for motorways or straighter A-roads, not twisty lanes.

It’s especially useful in traffic jams, though, where at low speed the car will track cars round corners. And Distronic stays engaged for 30 seconds after you’ve reached a standstill, re-engaging the moment the car in front moves off. No need to re-engage, or boot the accelerator.

Even this does not exhaust the capabilities of the Drive Pilot system. A new feature allows the car to pull out and overtake automatically, just by indicating, without needing to use the steering wheel. If traffic is approaching from behind, the car won’t pull out. And if a car pulls out in front of you suddenly, the E-Class will automatically overtake, providing it’s safe to do so. 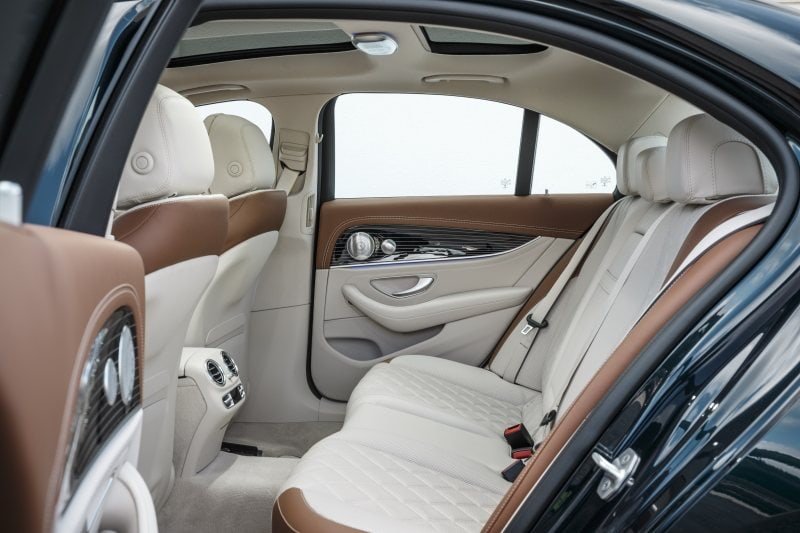 It doesn’t feel at all experimental – in fact we tested it in real-world conditions, and it worked perfectly, including a fairly nimble swerve to avoid a slow-moving car that suddenly pulled out in front of us. Right now this system is legal in Germany, but Mercedes is still waiting for pan-European approval – so it’s possible initial supplies won’t have the full suite of systems installed.

Other safety systems, including pedestrian avoidance and automatic braking, carry over from the previous E-Class.

None of this detracts from the enjoyment of driving the E-Class with the systems all switched off. The electromechanical power steering seems to have more “feel” than the previous E-Class, and with nearly 200 horsepower on tap there’s no shortage of grunt for acceleration. 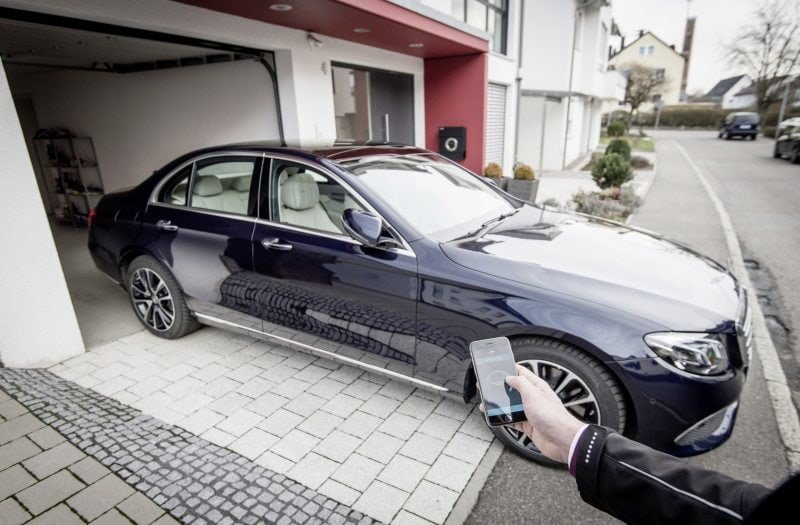 On top of all that, the E-Class is equipped with a Remote Parking Pilot, which allows the vehicle to be moved into and out of garages and parking spaces remotely using a smartphone app, enabling the occupants to get into and out of the car before parking in a very tight space. You can also use the smartphone as the car’s key – so you can make sure you locked your car even if you’re miles away.

The satnav also incorporates Car-to-X communication. This is car-to-car networking via mobile phone, which relays traffic information to other Mercedes cars equipped with the same system. You can highlight a problem, such as an accident,  just by clicking the Comand controller at the point on the road, and this reports the incident to emergency services as well as to other cars.

As night fell, we were able to test out the new automatic high-beam LED lights, which automatically detect a car in front or approaching, and “dip” the lights in the region around the car – dynamically shifting the darkened area as the car in front moves. Impressive, and mesmerising, but not cheap – it’s part of the £3,825 Premium Plus pacakage.

Our economy performance of 43.5mpg at exactly 30mph was some way short of the claimed 72.4mpg combined, but we know how inaccurate the test is compared to real-world conditions. It is a big improvement on the old E220d we last tested in 2013 (39.4mpg at 30mph). We reckon you’d certainly be able to get well into the 50s on a run on the new E-Class.

The age of the autonomous car is getting closer – so it’s reassuring to see a car company, rather than a tech firm, taking the lead. As Mercedes-Benz chairman Dr Dieter Zetsche said at the recent Geneva Show: “I am not aware of one Google or Apple car being sold; I know of a lot of Mercedes cars being sold with partial autonomous features.”

The autonomous features added to the E-Class are aimed at safety and, to some extent convenience. You’ll find traffic jams a lot less stressful thanks to the ability to track the car in front, and the system might save your life too, by stopping you from pulling out in front of an approaching car in the overtaking lane.

It’ll certainly help you keep points off your licence, as the ability to read speed limits and set the cruise control to match is a great feature.

Regardless of all this, the new Mercedes-Benz E-Class has a real high-quality feel, with a “mini S-Class” interior and an improvement in rear seat comfort. It looks good too, and many will welcome the return of the gunsight. Normal service restored, in so many ways.