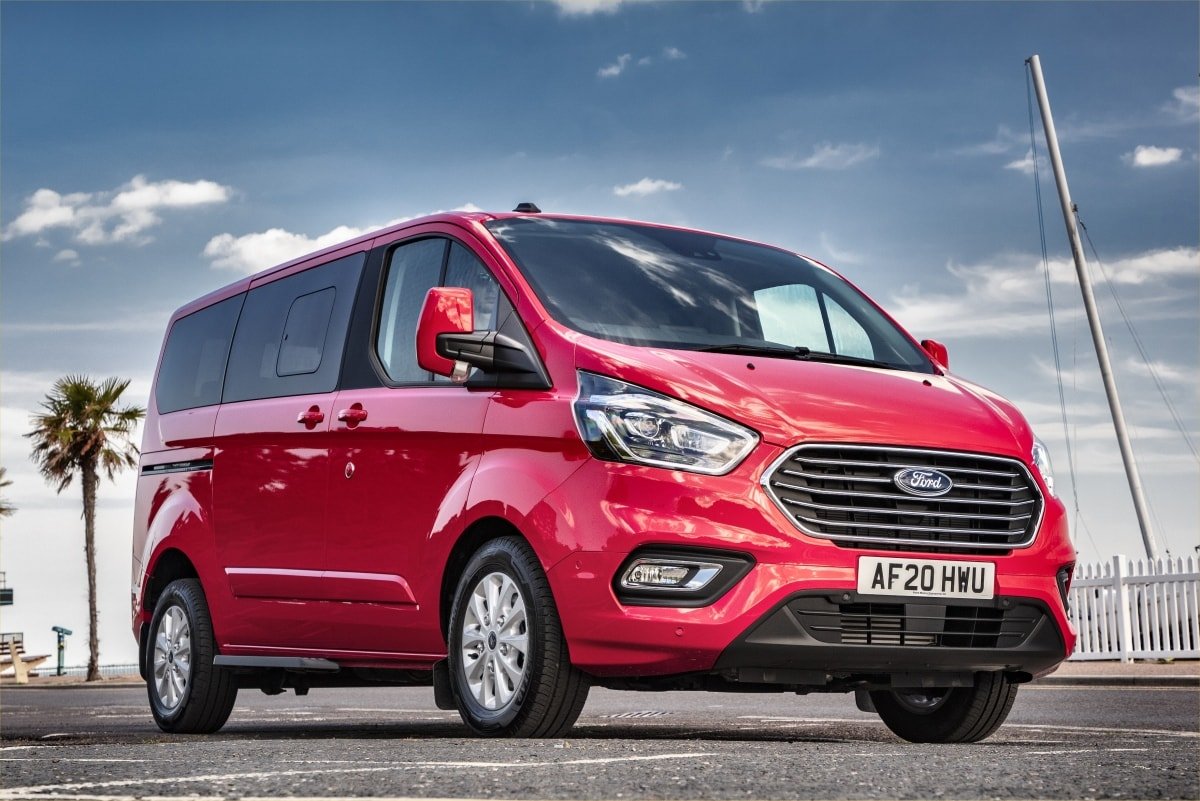 London ULEZ-compliant seven-seaters have been in serious short supply this year, regardless of Coronavirus. If you want an electric people-mover, the only vehicle available has been the Nissan e-NV200. Fortunately, the car companies are now getting their acts together. Vauxhall and Peugeot have unveiled battery-electric seven-seaters, while Mercedes-Benz’s EQ-V all-electric V-Class will be with us before the end of the year.

Meanwhile Ford has now entered the sector with a rather different proposition. Rather than go down the pure electric road, Ford has added a range-extender series hybrid powertrain to its top-selling Transit and Tourneo Custom range. This combines a 1.0-litre Ecoboost petrol engine with an electric drivetrain.

And there’s some extremely interesting technology to back this up. The vehicles are the first to be fitted with a system that uses live location data and geofencing to switch automatically from hybrid to electric drive mode in low-emission zones without driver intervention. This means the Tourneo Custom PHEV would comply with local clean-air zones, where only pure electric vehicles are allowed to enter.

The geofencing tech doesn’t only apply to city centres: vehicle operators can also create “green zones” to encourage low-emissions driving near schools, for example. When the vehicle leaves a controlled zone, it automatically switches to the most appropriate drive mode for the next leg of the journey.

It’s easy to use. The geofencing module features a small, unobtrusive screen mounted near the driver’s side cup holder. This tells the driver when the vehicle has detected it’s near a geofencing zone. A graphic showing a ring around an image of the vehicle turns from grey to green as the vehicle approaches the geofenced zone.

On entering the zone, the rung turns to solid green, and the vehicle switches to battery mode. The driver cannot switch it off – it only turns back to hybrid mode if the battery is depleted while in the zone. Telematics relay the encrypted data back to base, and share it with local authorities, so any congestion charges can be paid if the vehicle has not remained in EV mode, and wrongful fines avoided when it has.

On leaving the zone, the graphics return to a green ring, and the mode button is activated once again, so the driver can switch to hybrid, recharge or petrol power.

There are several modes, accessible by repeatedly pushing the mode button. The default mode is EV Auto, which automatically uses batteries and petrol engine as required, like any other hybrid. So the petrol engine kicks in on acceleration, or up hills. This works until the battery is depleted.

EV Now mode is pure battery electric. The petrol engine will not start until the range is completely depleted. This is the mode that you would use in a Clean Air Zone that is not geofenced.

EV Later switches the car to petrol power, allowing the driver to conserve battery life. So if you were taking a pick-up from Stansted Airport into the London ULEZ zone, you would use EV Later for the motorway section of the journey, before engaging EV Now at the point you enter the ULEZ.

Being a series hybrid means there is another mode – EV Charge. This allows the petrol engine to power the car and recharge the batteries. So if you’re on the way to the ULEZ, but your battery range is inadequate for getting through the zone, switch to EV charge and the engine acts as a generator, recharging the battery as you go. The engine runs faster while it’s doing this – and there is a trade-off in terms of higher fuel consumption, and there is noticeable extra cabin noise with the engine revving raster than normal. But at least you’re doing this on the motorway rather than in the city.

On our test, we took a 13-mile city route from Ford’s office on the former Olympic Park in Stratford to a site in Streatham, South London. Starting off, the EV charge indicator showed 22 miles of electric range. We engaged EV Now and set off. At Kennington, about two-thirds of the way there, the range was down to 13 miles, so I switched to EV Charge – and by the time I reached the destination, we were back up to 16 miles. The return journey used EV Auto until we reached the ULEZ boundary, at which point we switched back to EV Now. On returning to Stratford, we still had 9 miles of electric range to spare.

It’s clear that the system is very efficient – and it should be given the extent of Ford’s testing programme. Twenty pre-production vehicles have been on test in London with operators including Addison Lee, British Gas, Heathrow Airport, the Metropolitan Police and Transport for London.

This testing programme concluded that 75% of miles driven in central London by study participants were completed in zero-emissions EV mode. In total, the test vehicles covered 150,000 miles – 53,000 in electric mode. Indeed, by optimising the use of the modes, significant improvements can be made. A multi-drop journey from Stansted to the City which used 22.2 miles of electric range and 75.1 miles under petrol power was improved and shortened to the extent that EV mode took the majority of the miles: 47.1 electric vs 40.6 petrol. This included use of EV Charge mode to replenish the battery.

The Tourneo Custom PHEV uses a 13.6 kWh Lithium battery helps to deliver a zero-emission NEDC driving range of up to 33 miles (35 in the Transit van version). Using the onboard 1.0-litre EcoBoost petrol engine gives a total range of 317 miles (343 on Transit).

Recharging from a standard domestic mains supply takes 4 hours 20 minutes, or 2 hours 45 minutes using a commercial type-2 16-amp AC charger. Further electrical energy is captured through regenerative braking when the vehicle decelerates or brakes. The charge socket is on the front bumper, at the nearside corner.

Inside the vehicle there is little to give away the hybrid system. There is a slight compromise to luggage volume with a thicker rear pillar on one side of the boot. But the vehicle is a full seven-seater – our test car was equipped with conference seating in a 3+3 layout.

The dashboard’s only real change is the replacement of the rev counter with a charge meter to show if the battery is being used or replenished. Our car don’t have a satnav fitted either – though Apple Car Play allows you to use your app of choice, such as Google Maps or Waze.

A battery-electric version is “not for away”, according to Ford, so going forward, a pure EV option that will comply with post-2025 ULEZ rules will be available.

Series hybrids – or range-extenders – haven’t really caught on, but they have a lot in their favour for taxi and private hire operations, especially for operators that drive in and out of clean air zones.

The ability to holdback electric charge – and indeed to add more pure electric range by recharging the battery from the petrol engine – is a very useful feature. Meanwhile the presence of a petrol engine eliminates range anxiety – if you can’t plug in, you can at least fill up – so longer journeys are not an issue.

The improvements to Tourneo in 2018 added extra levels of comfort and refinement, and none of that is lost with the PHEV, other than a small amount of boot volume and a slightly louder engine note when the 1.0-litre petrol engine is on EV Charge mode. If you confine the use of this mode to highway driving rather than around town, it’s less of a problem.

The Tourneo Custom scores heavily for versatility – it’s capable of handling both executive work and family holiday airport runs, allowing it to straddle the large MPV private hire and chauffeur sector. The car scores heavily for the quality of its finish.

The Titanium trim level gives an extremely car-like cabin, and comfortable, flexible seats. The only downside is that the PHEV we tested was the short-wheelbase version, with a slightly limited boot; hopefully a LWB version will be added, as this makes it a genuine six-passengers-plus-luggage vehicle.

TwitterFacebookLinkedInEmail
Posted in Road Tests
← Professional Driver’s response to the Government’s consultation on the proposed phase-out of petrol, diesel and hybrid models by 2035Autocab moves to quell operators’ data fears after dramatic Uber takeover →
We use cookies for various purposes including analytics. By continuing to use the service, you agree to our use of cookies. - Cookie Policy